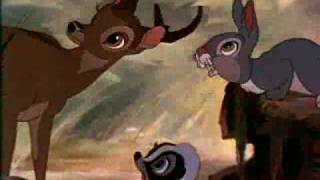 In Disney's spectacularly animated forest fable, a fawn named Bambi is born, destined to become "Prince of the Forest." He soon befriends other woodland creatures such as Flower, a bashful skunk, and Thumper, an outgoing rabbit. As the years pass, they encounter a number of life's lessons in the woods, including the death of Bambi's mother at the hands of hunters. Eventually, Bambi comes of age, completing the cycle of life and taking his father's place.

Based on the classic novel by Felix Salten, BAMBI demonstrates the strength of family values and camaraderie. Director David Hand adds a mixture of great songs and life-like backgrounds to make this early Disney film an unforgettable film classic for all ages.

BAMBI is Disney's classic tale about a young fawn coming of age in a forest full of friendly creatures. Bambi bounces through the forest gleefully with his friends Flower and Thumper, following the ways of the animal kingdom. But as he grows up, he learns some hard lessons about life. A must-see family movie, BAMBI is a beautiful landmark in animated films, and one of the Disney Studio's finest.

The Little Mermaid
$28
Add to Cart

The Princess and the Frog (DVD)
$18.40 Super Savings
Add to Cart

Snow White and the Seven Dwarfs (DVD)
$28
Add to Cart