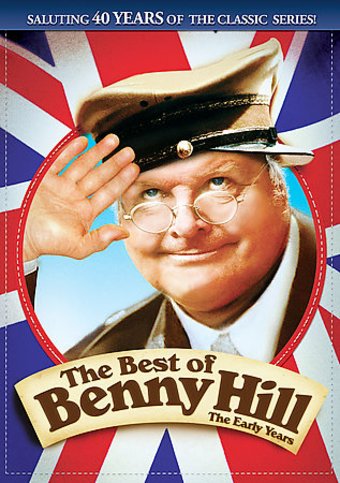 Get email alerts for Benny Hill
51 ratings
Available: Usually ships in 2-4 business days
Add to Cart
Add to Wishlist
Format:  DVD
item number:  QK8G
Related products:
Who Done It? for $6.98
Monty Python - And Now For Something Completely Different for $13.10
Bean for $12.50
91% recommend us!

A legendary figure in the history of British comedy, Benny Hill's unique blend of bawdy humor and cheeky fun has seen him win over millions of fans across the globe. His television shows revolved around Benny creating havoc as he chased after scantily clad women, creating mischief wherever he went. This release features some of his best early work, with episodes culled from the 1970s run of the show. This set includes wacky commercials, silly songs, and the all-important "Hill's Angels."

His unique comedy stylings made him one of the most beloved entertainers in the world. Now, the hilarity of Benny Hill comes home in this side-splitting collection. Featuring classic early moments from "The Benny Hill Show," Benny delights as a randy surgeon, an inept fitness instructor, a befuddled countess, a bumbling talk show host and more! Accompanying Benny are a host of silly spoofs, crazy commercials, cheeky songs and the infamous "Hill's Angels" beauties to round out the fun.

The Best of British Comedy
$19
Add to Cart