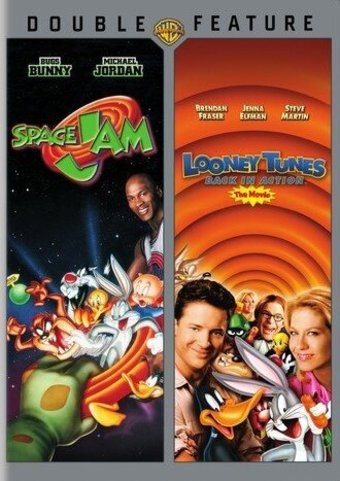 Space Jam: Basketball legend Michael Jordan stars as himself, a retired sports hero trying his hand at baseball and failing miserably. Meanwhile, the Looney Tunes gang, led by Bugs Bunny, are kidnapped by aliens called the Nerdlucks. It seems that the Nerdlucks' theme park, Moron Mountain (a barely-veiled dig at Disney) is failing to attract customers. The space invaders are convinced that the appearance of Bugs and his pals Porky Pig and Speedy Gonzalez will beef up business. Bugs makes his captors a deal -- they'll play a game of basketball for their freedom. When the Nerdlucks stack the deck by pilfering the talent of NBA superstars Charles Barkley and Patrick Ewing, the Warner Bros. heroes enlist the aid of Jordan, who returns to the court to help the classic characters. While he prepares to play, Jordan is aided by fellow celebrity Bill Murray. Director Joe Pytka previously created many of the television commercials that featured Jordan as a paid endorser. Looney Tunes: Back in Action: In a land where cartoon characters and flesh-and-blood people work side by side, one little black duck lands in a big pot of trouble in this comedy, which brings the beloved Looney Tunes characters into the real world. Daffy Duck (voice of Joe Alaskey) has grown tired of his status as Warner Bros.' leading avian second fiddle and demands that if he can't be given equal billing with his rival Bugs Bunny (also voiced by Alaskey), he wants to be released from his contract. Kate Houghton (Jenna Elfman), Warners' vice president in charge of comedy, is way ahead of Daffy and orders studio stuntman D.J. Drake (Brendan Fraser) to kick the duck off the studio lot. D.J. soon discovers getting rid of Daffy is no easy task, and the duck is in tow when Drake makes a startling discovery -- his father Damien Drake (Timothy Dalton), a movie star best know for playing ultra-suave secret agents, really is a secret agent, and he's been kidnapped by Mr. Chairman (Steve Martin), the evil leader of the monolithic Acme Corporation. Damien knows the secret hiding place of the priceless Blue Monkey Diamond and Mr. Chairman will stop at nothing to get it, so D.J. and Daffy set out to rescue Damien and save the diamond, one step behind Acme's musclemen and one step ahead of Kate and Bugs, who now realize how important Daffy is to the Looney Tunes franchise. Looney Tunes: Back in Action also stars Heather Locklear as a lounge singer working for Yosemite Sam (voice of Steve Babiar), Joan Cusack, John Cleese, Stan Freberg, and Roger Corman.