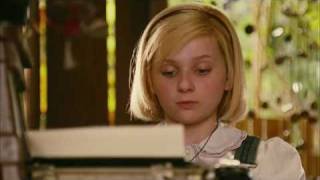 A favorite from the American Girl historical doll collection, Kit Kittredge makes her big-screen debut with this feature. Oscar-nominated actress Abigail Breslin (LITTLE MISS SUNSHINE) brings the doll to life and lights up the story's Depression-era setting with her precocious charm. Kit is aware that the Great Depression is under way, but she feels lucky it hasn't directly touched her. While other people in the country struggle to find work and food, the 10-year-old plays comfortably in her tree house and writes articles she hopes will be published by the Cincinnati Register. But everything changes when Kit's dad (Chris O'Donnell) loses his job, forcing Kit and her mother (Julia Ormond) to turn their home into a boarding house while he goes to Chicago in search of work. As a colorful assortment of characters fill Kit's home, Kit learns how to be resourceful. When she gets to know a pair of child hobos, she realizes how kind and friendly homeless people can be. With her journalistic mind in overdrive, she sets out to clear their name in print, dispelling rumor with hard fact and a child's fresh perspective. But when her house is burglarized and all fingers point to her trusted new friends, Kit doesn't know where to turn. Will her investigative skills be able to save her family from the poorhouse' Only time will tell. KIT KITTREDGE offers something for young viewers and adults alike, and boasts an all-star cast (including Stanley Tucci, Jane Krakowski, and Joan Cusack) in addition to its likable young star. Little girls and American Girl fans should delight in the film's faithful recreation of the character's beloved period costumes. Children may even learn a thing or two about history as they watch Kit's thrilling adventures unfold.

22%off
Alexander and the Terrible, Horrible, No Good, Very Bad Day
$11.70 Super Savings
Add to Cart

American Girl: McKenna Shoots for the Stars
$10 on Sale
Add to Cart

58%off
Jane Morgan
The American Girl from Paris Revisited (2-CD)
$9.98 on Sale
Add to Cart