The Lady of Scandal

A famous British actress gets involved with two members of a reserved British noble family, whose plan to get rid of her backfires. 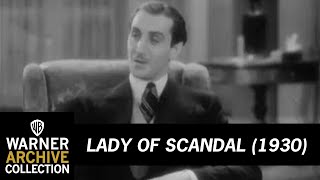 John, aka Lord Teylesmore (Ralph Forbes), thinks he's found a way to get popular London stage actress Elsie Hilary (Ruth Chatterton) to marry him after she's turned down his daily proposals for a year: he'll announce their engagement in all the papers. Shocked and dismayed, John's staid, blue-blood family attempts to get Elsie to break off the "engagement" with a £5,000 bribe. Infuriated, she becomes determined to wed the young aristocrat. An emergency family council is called at the Teylesmore country estate, with John's favorite cousin, Edward (Basil Rathbone) –- who's used to his family's disapproval thanks to a scandal of his own –- arguing for Elsie's acceptance. Convinced she will soon chafe against the confines of the ruling class, the family welcomes Elsie, at least on a temporary basis. She wins the clan over, but soon finds her heart wanting another.
This product is made-on-demand by the manufacturer using DVD-R recordable media. Almost all DVD players can play DVD-Rs (except for some older models made before 2000) - please consult your owner's manual for formats compatible with your player. These DVD-Rs may not play on all computers or DVD player/recorders. To address this, the manufacturer recommends viewing this product on a DVD player that does not have recording capability.