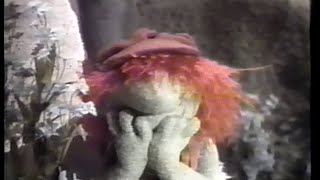 The magical underground realm of Fraggle Rock is situated behind a wall in inventor Doc's laboratory, in this charming series from the master of puppets. Doc's dog Sprocket knows something is back there, and is constantly trying to get to the fraggles, while far below in the brightly-lit caverns, the furry fraggles frolic and play, and learn valuable lessons along the way. All 24 episodes of the first season are included here, as Wembley, Gobo, Red, Mobley, and Boober have exciting adventures and present their catchy, infectious repertoire of songs. Adults will revel in the memories while children will delight in the newfound fun, as Boober has to muster his courage after he loses his lucky hat in "You Can't do that Without a Hat," and Red's best-laid plans go awry in "Let the Water Run." Other episodes include "The Thirty Minute Work Week," where Wembley has to choose his occupation; "Catch the Tail by the Tiger," where Gobo ventures into outer space to find Traveling Matt; and "The Finger of Light," which sees Mokey learning how to be in charge.