Great Men of Rock & Roll - The 60s
by Various Artists 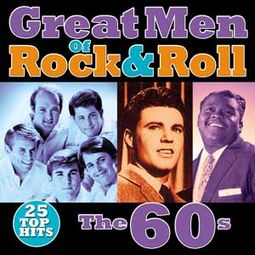 Each volume of the "Great Men" collection spans a decade of music from the greatest male artists in Rock & Roll. Every song is the original hit version by the original artist.

Collectables' Great Men of Rock & Roll: The 60s gathers up 25 songs from the archives of EMI and the labels that fall under its umbrella, like Laurie and Capitol. They are all indeed songs by men; they are from the '60s, too. Great? You might draw the line before you include Bobby Goldsboro ("Honey") or Freddie & the Dreamers ("I'm Telling You Now") in that category. Rock & roll? Well, there isn't much rock or roll to Nat King Cole ("Ramblin' Rose") or Rolf Harris ("Tie Me Kangaroo Down, Sport"). Still, if you forget the title, what you are left with is a fairly enjoyable mishmash of styles and artists, including some truly great bands, artists, and songs, the Beach Boys' "Good Vibrations," the Spencer Davis Group's "Gimme Some Lovin'," Glen Campbell's "Wichita Lineman," and Dion's "Runaround Sue" being chief examples of greatness. With a little more care as to the pacing and lineup, this could have been a top collection. It is pretty good, though, and it does give a pretty decent feel as to what the men of the '60s were up to. ~ Tim Sendra


Plus great sound quality, a fair price, fast shipping, and no damage...what more could you ask for ? Oldies.com is THE place you can count on !