An insane barber kills his customers and supplies their bodies to the baker for use in meat pies. 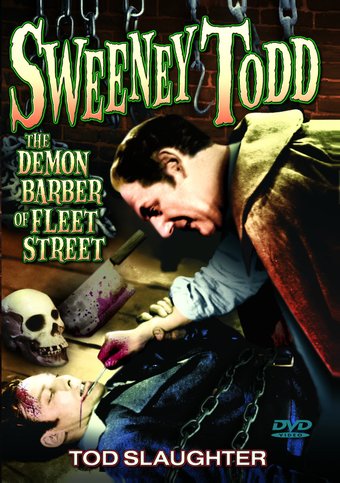 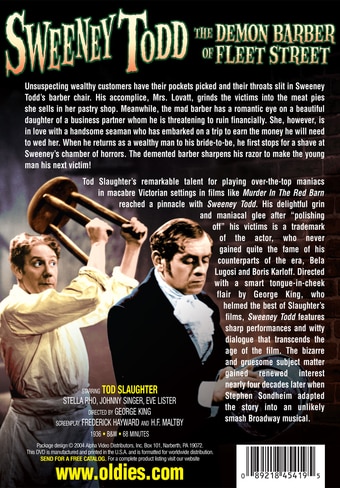 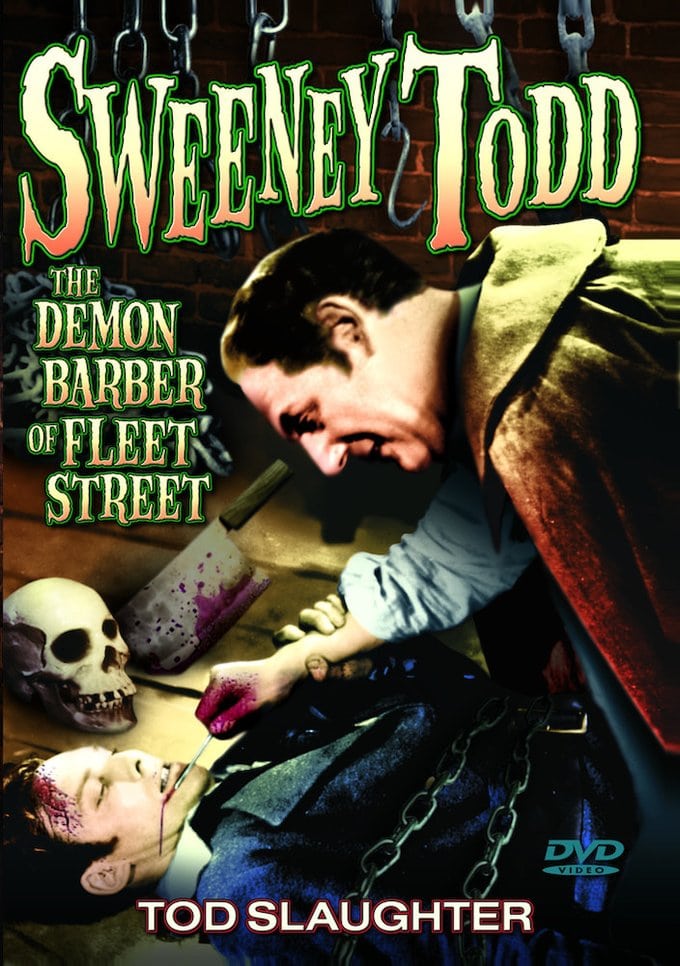 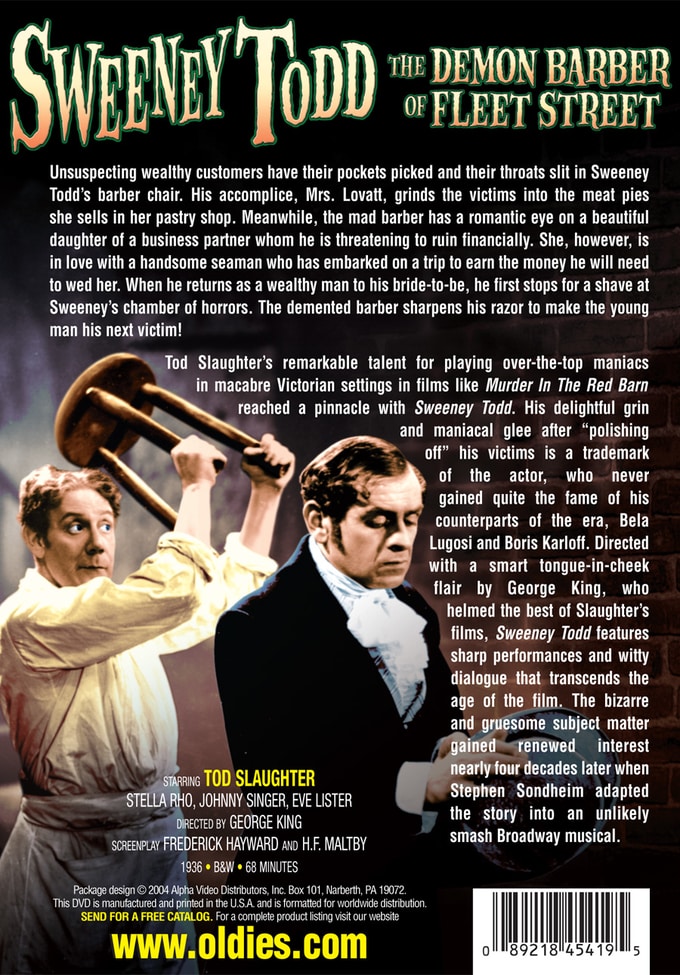 Unsuspecting wealthy customers have their pockets picked and their throats slit in Sweeney Todd's barber chair. His accomplice, Mrs. Lovatt, grinds the victims into the meat pies she sells in her pastry shop. Meanwhile, the mad barber has a romantic eye on a beautiful daughter of a business partner whom he is threatening to ruin financially. She, however, is in love with a handsome seaman who has embarked on a trip to earn the money he will need to wed her. When he returns as a wealthy man to his bride-to-be, he first stops for a shave at Sweeney's chamber of horrors. The demented barber sharpens his razor to make the young man his next victim!

Tod Slaughter's remarkable talent for playing over-the-top maniacs in macabre Victorian settings in films like Murder In The Red Barn reached a pinnacle with Sweeney Todd. His delightful grin and maniacal glee after "polishing off" his victims is a trademark of the actor, who never gained quite the fame of his counterparts of the era, Bela Lugosi and Boris Karloff. Directed with a smart tongue-in-cheek flair by George King, who helmed the best of Slaughter's films, Sweeney Todd features sharp performances and witty dialogue that transcends the age of the film. The bizarre and gruesome subject matter gained renewed interest nearly four decades later when Stephen Sondheim adapted the story into an unlikely smash Broadway musical.

This is the original British version of the musical SWEENEY TODD. It's the gruesome tale of a greedy barber, who with the aid of the baker next door is able to kill his customers and dispose of the bodies undetected.

British | Cannibalism | Psychos | Murder
This product is made-on-demand by the manufacturer using DVD-R recordable media. Almost all DVD players can play DVD-Rs (except for some older models made before 2000) - please consult your owner's manual for formats compatible with your player. These DVD-Rs may not play on all computers or DVD player/recorders. To address this, the manufacturer recommends viewing this product on a DVD player that does not have recording capability.

Never Too Late to Mend
$10
Add to Cart

50%off
Tod Slaughter Vintage Terror Collection (Murder In The Red...
$23.94 on Sale
Add to Cart

Customer Rating:
Based on 6609 ratings.


Although this can be pretty scarey in places, it's just too corny and over-acted. If you want this story to scare you, see the musical version.


My wife and I both enjoyed this movie but we can't get Sweeney Todd's maniacal - "hoe hoe hee hee hee" - laugh out of our heads. Another great movie from this decade.


Tod Slaughter's best-known film is a good showcase for the ham-acting skills that have made him a cult figure. Slaughter is at his evil, sadistic, maniacal best as the infamous barber who robs his customers by flipping them into the basement via a trick barber chair, then "polishes them off" with his razor if the fall didn't break their neck. His shop is connected by an underground passage to the bakery across the street, and the lady who runs it helps him dispose of the bodies by baking them into meat pies. Tod is also trying to force a business partner's daughter to marry him by holding a debt over her father's head, and when her sailor boyfriend comes back to town, he narrowly escapes Tod's chair and tries to put an end to his crimes. Tod has a ball committing all these atrocities, laughing like a maniac whenever he's about to kill somebody, and even grinning with unbridled gusto as he threatens to cut out a poor young orphan boy's tongue with his razor. He makes Bela Lugosi look subtle, but that's what's so great about him. His "hoo-hoo-hah-hah!" evil laugh is the very definition of fiendish, and even though he's hammier than an Oscar Meyer warehouse, his gleeful aplomb for the nastiest activity possible probably scared the rest of the cast. Gotta love it, even if it is pretty creaky.


I am anxious to see this come out. I saw it once before (ON BETA!) and it was a fantastic piece of work. Good job Alpha/Oldies!


This is one of my favorites. A believable storyline with a creepy atmosphere.. Tod Slaughter does a great job. This movie really shouldn't be overlooked. I own the VHS and will be pre ordering the DVD. What sinister minds there were back in the 30's.