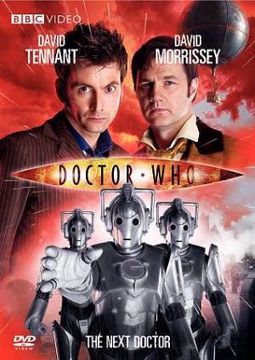 31 ratings
Currently Out of Stock: We'll get more as soon as possible
Notify Me When Available
Add to Wishlist
Format:  DVD
item number:  35EDD
Related products:
Doctor Who - #201: The Waters of Mars for $13.10
Doctor Who - Calling the Shots: Directing the New Series of Doctor Who for $13.98
Doctor Who (BFI TV Classics) for $9.98
91% recommend us!

The holidays should be a time for peace on earth, but David Tennant's Doctor Who doesn't get to rest in this special that takes him to Christmas Eve, 1851. With the help of another Doctor--who may be a future incarnation of himself--the Doctor must battle a CyberKing, CyberMen, and Cybershades who are wreaking havoc on the streets of Victorian-era London. As if that weren't enough, it may take two Doctors to fight a woman who is in league with the Cybermen.

Christmas Eve, 1851, and the Cybermen stalk the snow of Victorian LondonWhen the Doctor arrives and starts to investigate a spate of mysterious deaths, he's surprised to meet another Doctor and soon, the two must combine forces to defeat the ruthless Miss Hartigan. But are two Doctors enough to stop the rise of the CyberKing'

75%off
Johnny Cash
The Johnny Cash Family Christmas
$1.98 on Sale
Add to Cart

75%off
Jim Reeves
Twelve Songs Of Christmas
$1.98 on Sale
Add to Cart