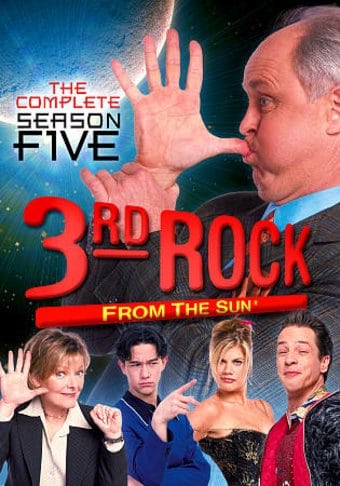 Calling all Earth dwellers! The Solomon's mission to investigate human behavior continues in the hysterical 5th season of 3rd Rock from the Sun! Award Winning John Lithgow stars as Dick Solomon, The High Commander of a group of aliens who turn everyday events into out if this world hilarity! Experience the unusual happening of Dick and the gang as they share the joys of childbirth, attend an in interactive murder mystery, recover from car crashes all while trying to learn about Earth customs and population. Kathy Bate, Laura Metcalf and William Shatner are amongst some of the Guest Stars who add to the ridiculous riot of season 5!

A science-fiction-themed sitcom, 3RD ROCK FROM THE SUN looked at the absurdity of human behavior and society from the perspective of a literal outsider. Four alien beings have been transported to Earth in order to more closely study mankind. Landing in the town of Rutherford, Ohio, each member of the quartet takes on a human appearance, forming the "Solomon" family: leader Dick (John Lithgow), sophomoric Harry (French Stewart), man-trapped-in-a-woman's-body Sally (Kristen Johnston), and eldest member (in the form of a teenage boy) Tommy (Joseph Gordon-Levitt). As they set out to examine the habits of the humans around them, the team experiences human emotions and encounters many comic misunderstandings from their too-literal readings of human words and actions. Using clever writing and acting rather than gaudy special effects to convey "alien-ness," 3RD ROCK FROM THE SUN was one of television's most creative comedy series. This collection presents every episode of the series' fifth season.

No Substitute for Victory: From Vietnam to Iraq (DVD)
$8.70 Super Savings
Add to Cart