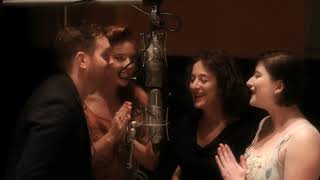 Paste (magazine) - "If you want your Christmas music to sound like stepping inside a snow globe, look no further than this Canadian's canonical record."

Except for a 2003 EP, Michael Bubl‚ hadn't released a holiday album until 2011's Christmas, which coincided with a television special on NBC, A Michael Bubl‚ Christmas. The album was produced by David Foster, Bob Rock and Humberto Gatica, and featured duets with Shania Twain, the Puppini Sisters, and Thal¡a, among others. Along with holiday favorites ("Silent Night," "Jingle Bells," "White Christmas," "Santa Claus Is Coming to Town"), Christmas also features "Cold December Night," an original from Bubl‚. Special editions included three bonus tracks and an exclusive ornament within extended packaging.

Pentatonix
The Best of Pentatonix Christmas
$12.10
Add to Cart