They’re Out To Beat the Devil At His Own Game!

10K ratings
Out of Print: Future availability is unknown
Notify Me When Available
Add to Wishlist
Format:  DVD
sku:  QSE3
Also released as:
Beat the Devil for $6.90
Our customers love us! 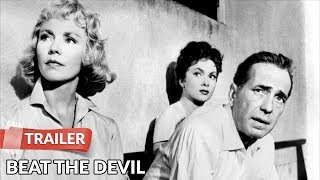 "Harry, we must beware of these men. They're desperate characters. Not one of them looked at my legs."
- Gwendolen Chelm (Jennifer Jones)
"Trouble with England, it's all pomp and no circumstance. You're very wise to get out of it, escape while you can."
- Billy Dannreuther (Humphrey Bogart)
"Time! Time! What is time' The Swiss manufacture it. The French hoard it. Italians want it. Americans say it is money. Hindus say it does not exist. Do you know what I say' I say time is a crook."
- O'Hara (Peter Lorre)
"Only the phonies liked it. It's a mess!"
- Humphrey Bogart on the film
"The formula of 'Beat the Devil' is that everyone is slightly absurd."
- John Huston on the film

John Huston and Truman Capote co-wrote the screenplay while working on location. A whimsical parody of The Maltese Falcon and other 1940's detective movies in which Bogart so often starred (and Huston directed).Tells of the exploits of a group of travelers on a steamboat who each hopes to carry off a huge swindle in the uranium fields of Northern Africa. While not a commercial success upon its release, the film has come to define the genre of spy movie spoofs.