The Last Man on Earth

The last survivor of a horrific plague fights to stay alive in a world of flesh-eating zombies. 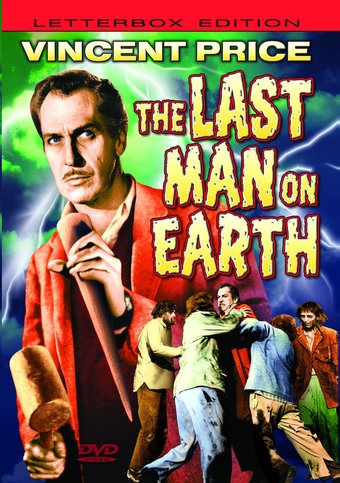 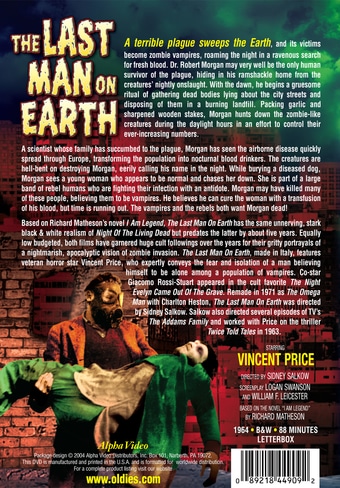 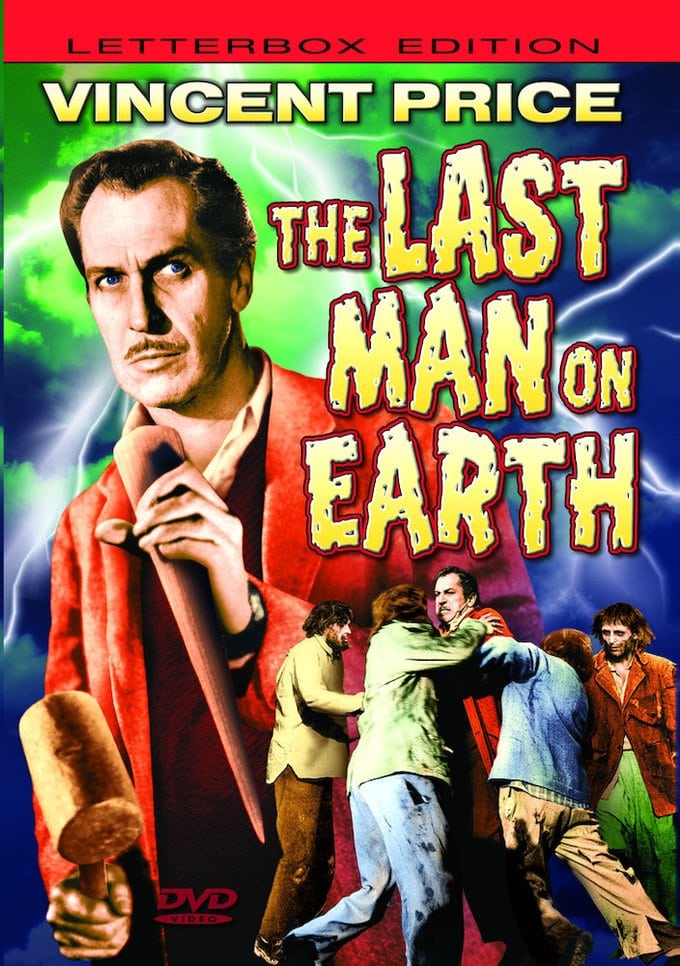 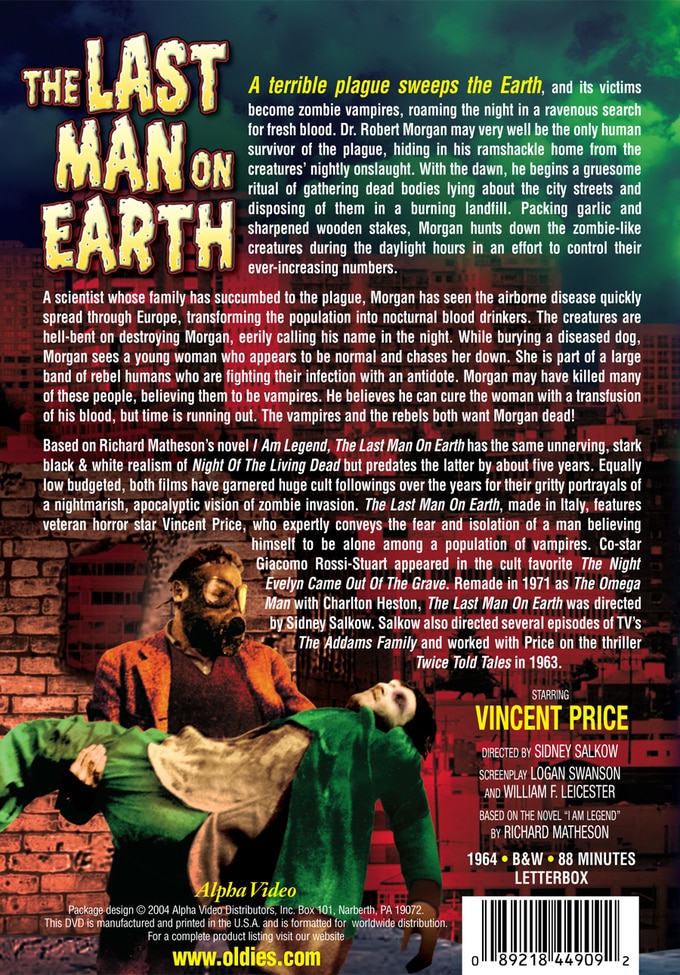 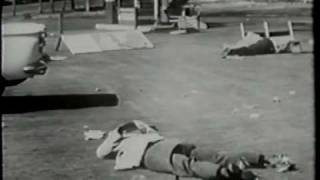 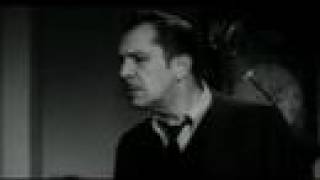 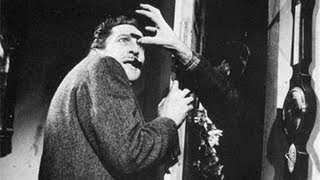 Joe Dante on THE LAST MAN ON EARTH (Featurette)

A terrible plague sweeps the Earth, and its victims become zombie vampires, roaming the night in a ravenous search for fresh blood. Dr. Robert Morgan may very well be the only human survivor of the plague, hiding in his ramshackle home from the creatures' nightly onslaught. With the dawn, he begins a gruesome ritual of gathering dead bodies lying about the city streets and disposing of them in a burning landfill. Packing garlic and sharpened wooden stakes, Morgan hunts down the zombie-like creatures during the daylight hours in an effort to control their ever-increasing numbers.

A scientist whose family has succumbed to the plague, Morgan has seen the airborne disease quickly spread through Europe, transforming the population into nocturnal blood drinkers. The creatures are hell-bent on destroying Morgan, eerily calling his name in the night. While burying a diseased dog, Morgan sees a young woman who appears to be normal and chases her down. She is part of a large band of rebel humans who are fighting their infection with an antidote. Morgan may have killed many of these people, believing them to be vampires. He believes he can cure the woman with a transfusion of his blood, but time is running out. The vampires and the rebels both want Morgan dead!

Based on Richard Matheson's novel I Am Legend, The Last Man On Earth has the same unnerving, stark black & white realism of Night Of The Living Dead but predates the latter by about five years. Equally low budgeted, both films have garnered huge cult followings over the years for their gritty portrayals of a nightmarish, apocalyptic vision of zombie invasion. The Last Man On Earth, made in Italy, features veteran horror star Vincent Price, who expertly conveys the fear and isolation of a man believing himself to be alone among a population of vampires. Co-star Giacomo Rossi-Stuart appeared in the cult favorite The Night Evelyn Came Out Of The Grave. Remade in 1971 as The Omega Man with Charlton Heston, The Last Man On Earth was directed by Sidney Salkow. Salkow also directed several episodes of TV's "The Addams Family" and worked with Price on the thriller Twice Told Tales in 1963.

Based on Richard Matheson's SF thriller I AM LEGEND, THE LAST MAN ON EARTH is about a man who survives a global plague only to be stalked nightly by zombielike victims who call out his name. Vincent Price stars as Robert Morgan, a scientist who tried desperately to come up with a cure for an airborne virus that was killing people around the globe. Although he could not develop a serum in time to save his family, he himself seems to be immune from the disease. Thus, he is left to wander the streets by day, staking zombies, then barricading himself in his house each night as the zombies try to break in and kill him. Price is excellent in the role, going about his horrible business as if it were just another day: waking up and eating breakfast, putting on a suit, calmly staking the zombies, making dinner, listening to records at night. But when he suddenly sees what looks like another living soul out in the daylight, his world is suddenly turned inside out.

I Am Legend
$6 Super Savings
Add to Cart

24%off
I Am Legend (Blu-ray, Original & Alternate Versions)
$7.60 Super Savings
Add to Cart

Customer Rating:
Based on 31220 ratings.


I love Vincent Price, but, ohhhh was this movie depressing. It's not bad enough that all the people die, but, to come back as zombies and live with it day in and day out...well, I'd rather watch a few ghosts and murders and get on with my life!!


I really enjoy Vincent Price movies, but this one was a little slow and wasn't quite what I was expecting. It's one of those movies that would have been better if it were faster in it's pace. Most of the other reviews here accurately describe the movie, so I won't repeat the. But, if you don't mind a movie that takes it's time in unfolding and concluding, give this one a spin in your dvd player. I will say though that the picure and sound are EXCELLENT!


I was pleasently surprised by this movie.. I have yet to see a Vincent Price movie tht I didn't like.. This movie first of all being presented in widescreen is awesome in itself but the clearity of the picture is incredible. I was expecting a typicle Dawn of the Dead story with vampires from what I read.. but.. there was a PLOT TWIST. I have to admit that I wasn't expecting it.. I recommend this flick to any Vincent Price fan...


The Alpha picture and sound quality is excellent, and the story is fascinating. It was remade as "The Omega Man," starring Charleston Heston.

Vincent Price is a doctor involved in combatting a deadly plague that leads to vampire-like zombies. Since he survives, he must then battle the zombies. What's unusual is the machismo he brings to the role, at odds with the oft-times effeminate manner he used (for example "House on Haunted Hill" or "The Wax Museum").


I am really pleased Alpha has released this movie on DVD, I've been after a copy for years! The print is Letterboxed and looks great. The sound is nice, too! Buy this and screen it with 'House On Haunted Hill', great for Halloween!!!


I am sorry to post three reviews but I am really jazzed about this film. I wish Oldies let us edit this...

There is in existance another movie called "The Last Man On Earth" it was made in 1924 and is silent. I think this is an amazingly fine flick and I want you to see it but please-I trust Oldies and Alpha Video to put out a great product-the "other purveyor" I mentioned below boxes the Price film in a box which describes the 1924 silent version. I was in fact buuying that silent version when I serenditpitously found this gem inside. In other words the bozos just looked at the title and stuck it in a box without ever bothering to find out if it was the right movie. They don't know thier product. Their product like I said is in my lousy opinion unacceptable. The print is washy. not letterboxed and the audio cracks like whip.

Wait for the Oldies/Alpha version. I doubt they will let us down!


And it's letterboxed Cripes-what else do you want!


I have this on dvd by another purveyor (who shall remain namless). The print and audio is second rate. I was hoping that Alpha would release it. Alpha has consitantly brought excellent quality to DVD and I am confindent they have done so again! I will buy this version when it comes out in late August.

The story predates "Night of the Living Dead " by a couple of decades but the story line is amazingly simular. The zombies here have a bit of rudimentary intelligence allowing them to articulate thier desires to kill Price while still being unable to out run him.

This is an Italian made film with American (or rather English speaking ) actors-it is not dubbed.
I know very little of the history except that it has seldom-if ever- been seen on TV and I do not recall it being in theatres (and I am old enough to recall but not so old I have forgotten.)

Buy this movie. You absolutley will not regret it!