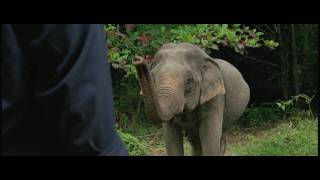 Three years after his "experimental" phase wrapped with the jarring, iconoclastic CONTAINER, Swedish enfant terrible Lukas Moodysson returned for this sprawling, ambitious social drama. Echoing Alejandro González Iñárritu's BABEL and featuring two Hollywood A-listers as his leads, MAMMOTH also marked the director's premier English-language project. Michelle Williams and Gael García Bernal co-star as Ellen and Leo, New York marrieds; she's an emergency-room surgeon, he's a listless, vaguely dissatisfied Internet game designer. They have a family, albeit an unconventional and dysfunctional one: seven-year-old daughter Jackie (Sophie Nyweide) is practically being raised by a 24/7 Filipino caregiver, Gloria (Marife Necesito), who dotes on her incessantly. This provokes the envy of Ellen and the resentment of Gloria's two geographically estranged sons, Manuel (Martin Delos Santos) and Salvador (Jan Nicdao), who repeatedly phone their mom from Manila and plead with her to come home. Gloria's mother grows so distressed by this behavior that she attempts to show Salvador just how easy his life is in comparison to that of others, which leads to unanticipated tragic consequences. Meanwhile, Leo teams up with a shifty associate, Bob (Tom McCarthy), flies to Thailand, and encounters a freewheeling, laid-back working mother named Cookie (Run Srinikornchot). Step by step, the actions that Leo takes while abroad create a domino effect and alter everyone's lives in irreversible ways.

A Good Woman is Hard to Find
$23.10 Super Savings
Add to Cart