A scientist becomes obsessed with vengeance when his daughter commits suicide. 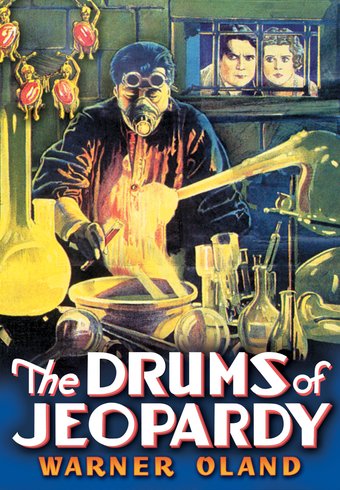 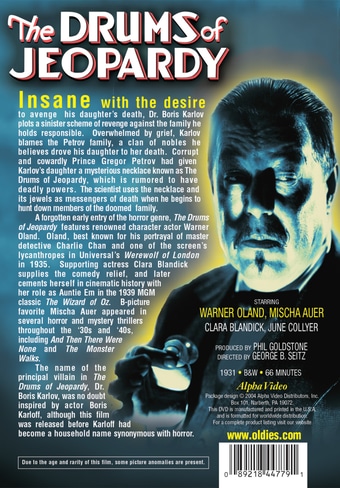 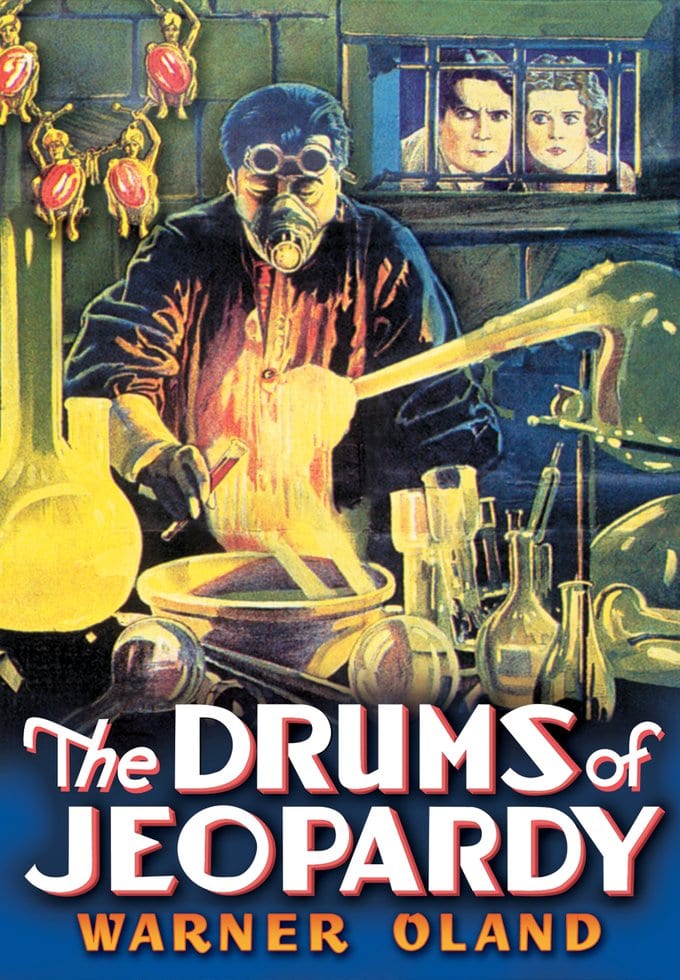 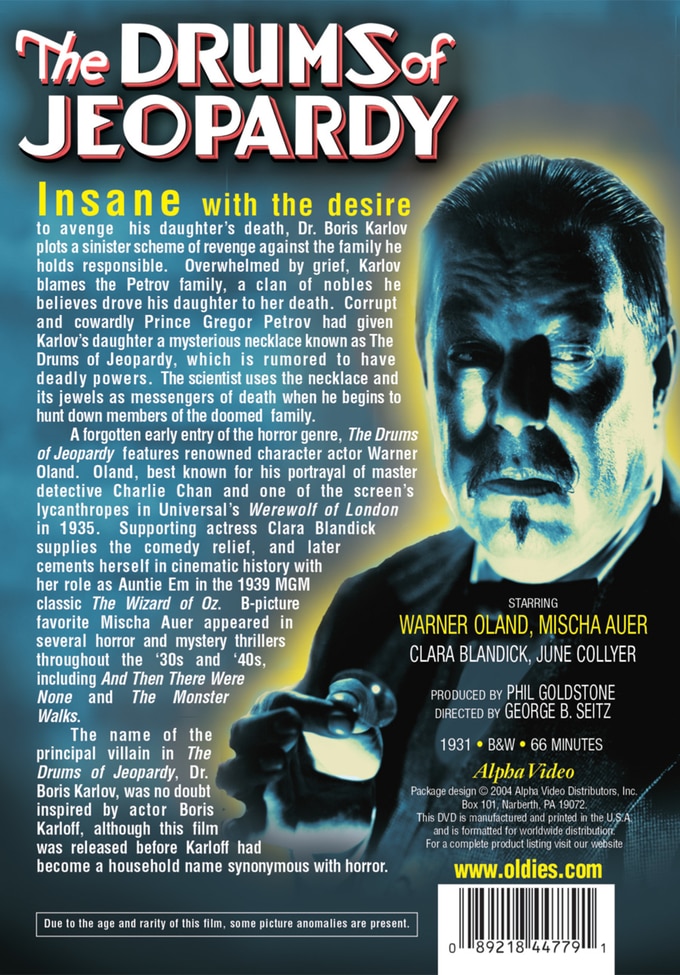 Insane with the desire to avenge his daughter's death, Dr. Boris Karlov plots a sinister scheme of revenge against the family he holds responsible. Overwhelmed by grief, Karlov blames the Petrov family, a clan of nobles he believes drove his daughter to her death. Corrupt and cowardly Prince Gregor Petrov had given Karlov's daughter a mysterious necklace known as The Drums of Jeopardy, which is rumored to have deadly powers. The scientist uses the necklace and its jewels as messengers of death when he begins to hunt down members of the doomed family.

A forgotten early entry of the horror genre, The Drums of Jeopardy features renowned character actor Warner Oland. Oland, best known for his portrayal of master detective Charlie Chan and one of the screen's lycanthropes in Universal's Werewolf of London in 1935. Supporting actress Clara Blandick supplies the comedy relief, and later cements herself in cinematic history with her role as Auntie Em in the 1939 MGM classic The Wizard of Oz. B-picture favorite Mischa Auer appeared in several horror and mystery thrillers throughout the '30s and '40s, including And Then There Were None and The Monster Walks.

The name of the principal villain in The Drums of Jeopardy, Dr. Boris Karlov, was no doubt inspired by actor Boris Karloff, although this film was released before Karloff had become a household name synonymous with horror.

A mad (as in "angry") scientist goes to his laboratory to concoct a formula for revenge on the family who caused his daughter's death.

Suspense | Thriller | Vengeance | Vintage | Murder | Mad Doctor
This product is made-on-demand by the manufacturer using DVD-R recordable media. Almost all DVD players can play DVD-Rs (except for some older models made before 2000) - please consult your owner's manual for formats compatible with your player. These DVD-Rs may not play on all computers or DVD player/recorders. To address this, the manufacturer recommends viewing this product on a DVD player that does not have recording capability.

22%off
One Frightened Night
$6.98 BLACK FRIDAY
Add to Cart

Revolt of the Zombies
$10
Add to Cart

Customer Rating:
Based on 361 ratings.


Don't ask me why. Maybe it's the villian's name (Dr Boris Karlov), the acting of Warner Oland (as a Russian and not as Charlie Chan), Mischa Auer (I knew a relative of his and like every corny role he played), the Russian revolution aspect, the terrible sound effects (whistling wind and thunder), the clever aunt with th funny lines. Whatever it is, I thoroughly enjoyed it.

Decent early pulp-style horror Movie Lover: call me Z from somewhere out there -- May, 12, 2006


Also known as Mark of Terror. Creaky old horror/mystery with Warner Oland as "Dr. Boris Karlov," a scientist crazed with vengeance against the Petrov family, who he blames for driving his daughter to attempt suicide. She had the Petrov family necklace, known as the Drums of Jeopardy because it's made up of figures of Indian drummers playing ruby drums, in her possession when she died, and legend has it that if anyone is given one of the figures they'll soon die. Karlov uses this to his advantage by sending out the jewels to the Petrovs, but of course he doesn't rely on the jewels alone and has his hired thugs help him with his killing. Some intrepid cops are out to stop his nefarious schemes, but Karlov proves to be pretty tricky and hard to stop. People must've been awfully skittish in the '30's if stuff like this actually scared them, since it's a rather slow and ordinary film. Still, it has some atmosphere and delivers some old-school fun, similar to stories that were being printed in the pulp magazines at the time.


Y'know, a person's got to sit through a whole mess of bad, creaky, ponderous 1930s movies mysteries to uncover the good ones that come along every once in a while, and that's why I'm so pleased to tell you about DRUMS OF JEOPARDY (1931), a fast-moving thriller that entertains from the first reel to the last.

Warner Oland is Dr. Boris Karlov(!), who has just gotten word that his daughter has taken her own life because she was, ahem, "ruined" by a man of some prominence. Karlov discovers in her possessions a fabled necklace called "The Drums of Jeopardy," so called because the bauble contains four rubies, each held in a setting that appears to be an Indian beating a drum. Legend has it that the stones are a portent of death. The necklace belongs to the Petrov family, pretenders to the Russian throne. Karlov vows to murder each of the four Petrov men (two brothers, and uncle, and a grandfather) who may be the lout that, ahem, "ruined" his daughter. Got all that?

The two older men are soon victims of Karlov?s machinations, and the two brothers (Lloyd Hughes and Wallace MacDonald) are hiding out in the country mansion of the beautiful June Collyer (and I mean REALLY beautiful; she's a stunner) and her grizzled old aunt (Clara Blandick, a/k/a "Auntie Em", in a funny supporting role). Hale Hamilton is the Secret Service agent trying to protect them (and doing a really poor job of it), Mischa Auer is Karlov's creepy henchman, and much more stuff than I could tell you here happens in the fast-paced 66 minutes. Director George Seitz had gotten his helming such silent serials as THE ROMANCE OF ELAINE and THE IRON CLAW, and his cliffhanger training comes in handy here, as the heroes and villains battle from a Manhattan wharf to the rooftops of New York to an old abandoned mill. Perils and death traps abound, and Oland is a very nasty, very memorable villain, one of those maniacal movie madmen that takes gleeful delight in how rotten they are. When he threatens to kill Miss Collyer, the brave, dashing Petrov brother (the other one's a lout) offers himself in her place: "You can do whatever you want with me!? he stoically avers. " I won't even cry out!? Oland sneers, "I WANT you to cry out." Early in the film, he pretends to be a medical doctor to attend to one of the wounded Petrov men. "Is he going to die?" a bystander asks. "That would not surprise me at all," Oland deadpans.

This is the kind of movie in which every night is pitch-dark and stormy, every flash of lightning reveals a face at the window, and nobody is to be trusted, even the cops. It is great fun and highly recommended. The Alpha DVD is pretty good, all things considered.

(Incidentally, Boris Karlov must've been more than a coincidence; both Seitz and Oland had worked with Boris Karloff in THE LIGHTNING RAIDER, a 1919 Pearl White serial. This was an in-joke that must've caused a lot of raised eyebrows once FRANKENSTEIN was released later in 1931.)


This melodrama, a remake of a 1923 silent thriller, offers a post-Fu Manchu but pre-Charlie Chan Warner Oland as a Russian scientist named Dr. Boris Karlov. Since this movie was released in early 1931 well before FRANKENSTEIN made a star out of a similarly named actor I am guessing the name was just a coincidence. Still . . .in the silent version Wallace Beery's character was called Count Gregor Karlov. One really has to wonder.
The plot is the stuff Victorian dramas thrived on. Dr. Karlov's daughter is seduced and abandoned by the rakish son of a wealthy family. She kills herself in grief and the scientist swears vengenace on the whole family. One by one he kills the members of the family he hates until only a few are left. he preceeds each killing by sending his intended victim a part of a necklace called "The Drums Of Jeopardy". Will he succeed? Ah, that would be telling!
Oland is quite good as the mad doctor. The photography by Arthur Reed is very good and gives a foreboding look to even harmless city streets. Watch for an exciting chase scene through those same darkened streets. The rest of the cast includes Lloyd Hughes, the hero from THE LOST WORLD (1925); Clara Blandick, best remembered as Auntie Em from THE WIZARD OF OZ (1939) and Mischa Auer who also starred in THE MONSTER WALKS (1932) and many other msyteries before he abandoned serious roles to become a comic villain. Director George B. Seitz went on to direct the 1937 remake of THE THIRTEENTH CHAIR.
So is DRUMS OF JEOPARDY worth seeing? You bet it is!