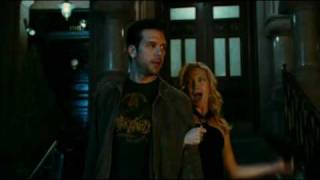 Love conquers even the relentlessly foulmouthed Lothario played by master-class comic Dane Cook (GOOD LUCK CHUCK) in MY BEST FRIEND'S GIRL. Tank (Cook) moonlights as an "emotional terrorist," which means when a guy wants to keep a girl from dumping him, he hires Tank to intervene. Tank arranges an accidental meeting with the girl, charms her at first, then takes her through the worst date of her life, sending her running back to the safety of his client. Jason Biggs (AMERICAN PIE) is Dustin, the nerd who wants his best pal Tank to work his magic on Alexis (Kate Hudson), the stunning girl from work who "just wants to be friends." Dustin makes a big mistake, since Alexis herself is looking for the raunchy fling Tanks offers, and Tank suddenly finds himself in the position to betray Dustin's trust. Taking a page from the book of Apatow (SUPERBAD, KNOCKED UP), director Howard Deutch and writer Jordan Cahan compensate both sides of the cup-holder armrest: amidst the frat boy-friendly shenanigans lurks girl-pleasing soap-opera hand-wringing as Tank faces tough romantic choices, and vice versa. Adding to the deal are some hilarious bits from Alec Baldwin--as Tank's "feminist studies" professor father--and Lizzy Caplan, as Alexis' roommate. Mainly this is for the Cook fans out there, and they should be pleased by his general free-form display of loutishness.