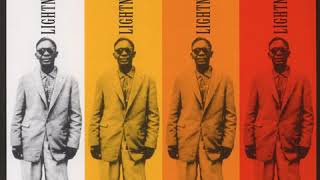 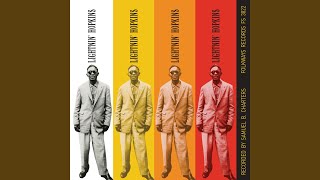 Entertainment Weekly - 4/5/91
A - "These country blues are as natural as breathing. Hopkins tells his stories effortlessly, with warm, conversational singing and fleet, stinging acoustic guitar. The songs have wonderful spontaneity, as if Hopkins didn't know where they'd end until he got there...fresh and powerful."

Solo Performer: Lightnin' Hopkins (vocals, guitar).
Reissue producer: Matt Walters.
Recorded in Houston, Texas on January 16, 1959. Originally released in 1959 on Folkways (FS3822). Includes liner notes by Sam Charters.
When folklorist Sam Charters tracked down Lightnin' Hopkins in Houston in 1959, the blues musician was discouraged enough about his music career to have pawned his guitar. Over the previous dozen years, Hopkins had recorded for numerous small labels, creating great music and occasionally hitting the charts. But his raw blues had recently fallen out of fashion. Charters bailed the guitar out of hock and bought the bluesman a bottle of gin. The pair then proceeded to Hopkins' dingy hotel room to record the album that revitalized Hopkins' career, establishing the Texas bluesman as a darling of the 60's folk circuit.
In retrospect, it's easy to see how Hopkins caught on with '60s folk audiences. He had the pedigree--as a child, he led Blind Lemon Jefferson around the streets of Houston. Hopkins had a complex personality. As a singer, the bluesman manages to project charm and orneriness simultaneously. His fluid guitar style is both exquisitely musical and technically impressive, while his facility for improvising lyrics undoubtedly delighted many audiences. For both its historical significance and the quality of the music it contains, LIGHTNIN' HOPKINS is a necessity for any serious blues fan.

Lightnin' Hopkins
Blues In My Bottle
$20.80
Add to Cart

54%off
Lightnin' Hopkins
From The Vaults of Everest Records, Part 2 - Prison Blues
$5.98 on Sale
Add to Cart

T-Bone Walker
Every Day I Have the Blues
$11.20 Super Savings
Add to Cart