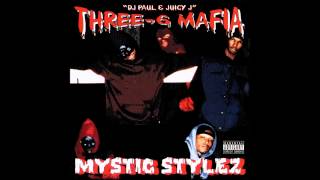 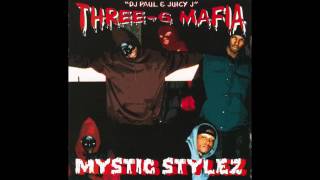 Three-6 Mafia includes: DJ Paul (keyboards); Juicy J.
Additional personnel includes: Wayne Tucker (bass); Archie Luv, Ann Hines.
When Three 6 Mafia released Mystic Stylez, the album that's widely seen as their full-length debut, it didn't make too many waves. After all, it was released independently in 1995, a time when indie rap labels struggled to break out of their local markets, and furthermore, the group was from Memphis of all places and their style was far from the mainstream -- very far. Yet years later, Mystic Stylez stands out as a definitive effort, defining not only what the collective would base its future empire upon but also the horrorcore style of hardcore rap that thrived among the underground scenes outside of New York during the era (e.g., Esham in Detroit, Brotha Lynch Hung in Sacramento, etc.). It's one of those albums that came and went during its initial release yet became a cult classic years later. Mystic Stylez became so for several reasons, among them the album's overall eerie tone, producers Juicy J and DJ Paul's Dirty South-defining lo-fi beats, and the group's downright confrontational rhetoric. Throughout the album, Three 6 Mafia embraces one taboo after another, often many at once, mainly violence ("Tear da Club Up"), drugs ("Now I'm Hi, Pt. 3"), sex ("Porno Movie"), and occultism ("Mystic Stylez"). All of this would be sheer exploitation for the sake of exploitation if not for the craft, especially in terms of production. And if you want evidence that there's more to Mystic Stylez than shock value, listen to "Da Summa," a calm moment of respite amid the thundering chaos that very well could be seen as the Memphis underground version of "It Was a Good Day" or the countless other laid-back summertime anthems of the mid-'90s. For the most part though, Three 6 Mafia is hell-bent here, literally, and that in itself was novelty enough for its time. Years later, in the wake of the successive Dirty South explosion, you can trace back the influence of Mystic Stylez, as a myriad heedless Southerners began throwing 'bows, blazing hydro, and embracing taboos left and right. In fact, even latter-day Three 6 Mafia became a replica of itself, as they continually strived to retain the underground essence of their own beginning. [Several reissues over the years have jumbled the original track listing a bit (adding EP tracks like "Live by Yo Rep," for instance) and altered the cover art, so it's worth shopping around. In particular, the 2001 Hypnotize Minds reissue features remastered sound and is recommended.] ~ Jason Birchmeier