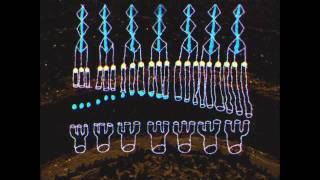 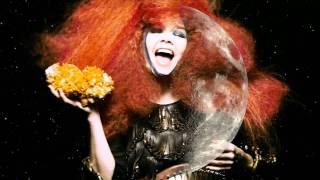 Rolling Stone - p.78
4 stars out of 5 -- "[I]n the songs, human desires and foibles echo natural phenomena..."
Entertainment Weekly - p.115
"[T]he singer's greatest strength remains the glistening natural resource flowing from her throat." -- Grade: A-
Uncut - p.92
4 stars out of 5 -- "'Dark Matter' is appropriately mysterious, its organ droning like an off-key hymn while she delivers a quavering vocal....BIOPHILIA's unsettling visions are compelling art."
Uncut - p.32
Ranked #27 in Uncut's '50 Best Albums Of 2011' -- "[A] ravishing negotiation between cutting-edge technology and emotional viscera."
Magnet - p.52
"BIOPHILIA is a quiet album....She amazes with the way she enunciates and transforms words into fluttery patterns."
Record Collector (magazine) - p.88
4 stars out of 5 -- "BIOPHILIA is closest in mood and sound to her fourth, the delicate and deeply personal VESPERTINE."

Over the years, the packaging of Bj”rk's albums grew famously, and increasingly, elaborate, but Biophilia is the first Bj”rk project where the set of songs isn't the complete package. Designed as a suite of interactive iPad and iPhone apps that explore humanity's relationships with sound and the universe, the album's concept was so grand that it began as a musical house and ended up including scientists, engineers, video game designers, and film directors among Bj”rk's collaborators. Biophilia's boldest innovations are in its presentation rather than in the actual music, which is surprisingly subtle and intimate given the concept's immense scope, but the perfect size to be cradled in a lap or palm. Bj”rk recorded parts of the album on an iPad, and these songs retain that intimacy. They also recall Vespertine, which was made primarily on a laptop and also kept the closeness of its creation, as well as Homogenic's percussive onslaughts, particularly on the literally volcanic "Mutual Core." Minus the project's other layers, Biophilia sometimes feels like a soundtrack; songs such as the album-opening "Moon" are so soft and delicate that they take a while to reveal themselves without their corresponding visuals. But just because the music is only one part of the Biophilia experience doesn't mean it's unsatisfying. Bj”rk embodies each song's musical, scientific, and emotional concepts fully and cleverly: "Crystalline"'s insistent repetition captures mineral formations shooting out of the ground, especially when drum'n'bass beats explode halfway through the song. Biophilia's educational side is never boring, in part because Bj”rk relates bigger phenomena to easily understood, and often tangible, occurrences; the earth is tilted on its axis like a human heart, and DNA is an "everlasting necklace." The gorgeous "Virus" expresses its multiplying phrases in a love song with facts and emotions in perfect harmony: "Like a virus needs a body/As soft tissue feeds on blood/Someday I'll find you/The urge is here." However, the most exciting thing about Biophilia is how it expresses the cycle of discovery and wonder. Knowledge and mystery don't have to be enemies: on "Cosmogony," science and spirituality hold hands and creation myths sit next to facts. Bj”rk holds the sheer magnitude of the album together with repeated motifs -- moons, stars, pearls, hearts, hands, and above all generosity -- that reflect Biophilia's layered meanings of love, life, and love of life. The album even completes an orbit with "Solstice" -- which features gravity harps built especially for this project (the CD version of the album also features three bonus tracks, including the hurtling, previously unreleased "Nattura"). Expectations run high whenever Bj”rk announces a new album: how will she top herself? Biophilia is easily her most ambitious project as a whole, but its music is more about completion than competition, even against herself. Educational and emotional in a uniquely approachable way, these songs are a lovely part of a bigger picture. ~ Heather Phares