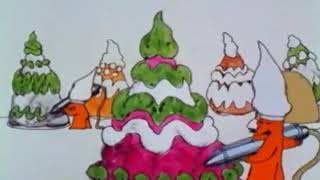 Directed by Academy Award-winner Fred Wolf, "The Point" tells the story of Oblio, a round-headed boy living in the land of "Point," where everything and everybody has one. Oblio, along with his trusty dog, Arrow, is banished to the Pointless Forest. The tale is narrated by Ringo Starr and includes songs written and sung by Grammy Award-winner Harry Nilsson. The definitive collector's edition.

Singer/songwriter Harry Nilsson wrote and produced this touching animated tale in 1971, and contributed some classic songs for the soundtrack. The soft Liverpudlian lilt of ex-Beatle Ringo Starr narrates the tale, telling the story of Oblio: A sad outcast from the village of "Point." largely eschewed by the local villagers due to his round head. The adventures of Oblio and his trusty sidekick dog Arrow subsequently take shape in the "Pointless Forest," a wonderland filled with colorful characters and some enchanting secrets.

The animated tale about the round-headed child, Oblio, born into a world where everything and everyone has a point, and his faithful dog Arrow, narrated by Ringo Starr and featuring the Harry Nilsson song "Me and My Arrow."

The Phantom Tollbooth
$17.90
Add to Cart