A man can be as strong as steel...but somewhere there's a woman who'll break him! 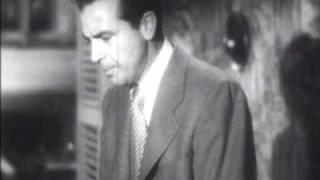 Dick Powell plays a returning World War II veteran who at first blush would seem to have everything going his way, a good marriage with a beautiful and loving wife in Jane Wyatt and a healthy, energetic young son in Jimmy Hunt, along with a position as a Los Angeles insurance executive and a lovely home. Powell exhibits the restlessness that many returning servicemen experienced following a global military conflict. His penchant for excitement leads him into an extra-marital affair with sexy blonde model Lizabeth Scott. What propels "Pitfall" into the ranks of a chilling film noir drama is the appearance of a ruthless sociopath willing to destroy all in his path to secure his objective, which in this case is possessing Liz Scott, body and soul. Corrupt private detective Raymond Burr overlooks the unyielding rebuff of Scott, who detests him. Burr convinces himself that eventually her feelings will change. The element thrusting Powell into the combustible picture is Burr's selfish realization that Scott holds true feeling for the decent but fallible insurance executive. He believes that to have Scott all to himself he needs to destroy both Powell and her boyfriend, who is about to be released from jail, played by Byron Barr. If he can successfully play off one man against the other they will be removed from the picture, leaving him to take up romantically with Scott. "Pitfall" came along when post-World War II film noir was generating cash and artistic dividends. The French artistic wave led by the likes of Albert Camus and Jean Paul Sartre recognized the significance of voices interpreting a world comprised of creative voices interpreting life in Cold War society, the first to live in the new nuclear age. Mental toughness was needed and film noir was a vehicle that displayed that on screen quality. - William Hare