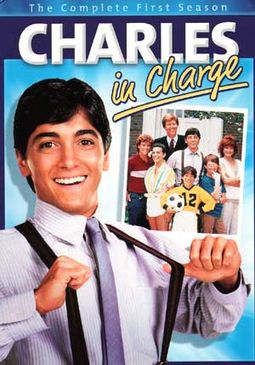 32 ratings
Currently Out of Stock: We'll get more as soon as possible
Notify Me When Available
Add to Wishlist
Format:  DVD  (3 Discs)
item number:  XTXB 06206D
91% recommend us!

One of the most entertaining sitcoms of the '80s is back as all 22 Season One episodes, including the hilarious pilot, of "Charles in Charge" come to DVD for the first time ever. Tag along with teen idol Scott Baio ("Happy Days") as he takes on the role of live-in helper at the Pembroke household and soon discovers he needs a little help of his own! Between his college friend Buddy (Willie Aames), his girlfriend Gwendolyn and the three mischievous Pembroke kids, Charles has a lot to learn about growing up when the household - and his love life - are spiraling out of control.

Joining Scott Baio are huge rising stars including Meg Ryan, Christina Applegate and Matthew Perry. And now, fans can see even more of Charles with an exclusive preview episode from Season 2 with Charles's new family, the Powells!

Popular during the 1980s, this sitcom stars Scott Baio (HAPPY DAYS) as Charles, an unlikely yet loveable nanny. In the first season, the 19-year-old college student gets a gig taking care of three kids whose parents have busy working schedules. Invited to live in their home, Charles juggles his child-rearing responsibilities with attempts to have a normal college life. Between romances, hanging out with his best friend Buddy Lembeck (Willie Aames), and keeping three pre-teens in check, Charles has his hands full. The first season of CHARLES IN CHARGE was unique because it was the only season to star the Pembroke family. The show got cancelled after its debut season, but in an unusual move, was brought back to television a few years later. When the show returned, it featured an entirely different family, the Powells. This release includes 22 episodes, including the series pilot. Just a few of the stars who appear as guests are Christina Applegate, Matthew Perry, and Meg Ryan. CHARLES IN CHARGE- THE COMPLETE FIRST SEASON also includes a preview episode from the show's second season.