A woman like Mona can drive men to extremes. 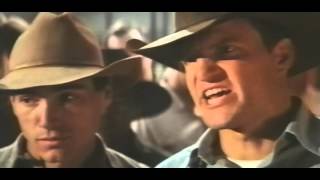 "A good woman is like a good horse, she's got bottom."
- Big Boy (Woody Harrelson) to Pete (Billy Crudup)

This epic western combines themes of classic westerns from the past, where cowboys fought to the death for honor and the love of a good woman, while exploring the modern predicament of the death of the true cowboy. Based on the novel by Max Evans, this tale of the friendship between two men is set against the sumptously beautiful lanscape of post-WWII New Mexico. After fighting in the war, two good friends decide to go into cattle business for themselves. Big Boy (Woody Harrelson) is an old-fashioned cowboy, living life on the edge with a drink in one hand and a pistol in the other. His good friend Pete (Billy Crudup) is more mild mannered, but both men work hard to make something of their ranch, struggling to succeed in a world that is quickly becoming hard for small-time cowboys to survive in. Their friendship is tested when they both fall for the same married woman, the lonely and gorgeous Mona (Patricia Arquette). When Big Boy and Mona become lovers, the small town seethes with rumors and jealous men want to see Big Boy dead for his infidelity. Director Stephen Frears displays a keen eye for period detail and the wide open beauty of the surroundings, letting the landscape speak for the film's more laconic characters. Woody Harrelson shines as the kinetic Big Boy with his usual raw energy and spark, while Billy Crudup turns in a typically outstanding performance as his more subdued friend Pete.

Based on the novel by Max Evans, this epic western is set amidst the rugged yet beautiful country of southern New Mexico directly following WWII and focuses on the cowboys who struggled to make it their home. The bond of friendship between two men (Woody Harrelson and Billy Crudup) is tested when they fall for the same woman (Patrica Arquette), who is already married. The film features an outstanding performance by Harrelson as Big Boy, a live-wire cowboy with a reckless heart who refuses to give up the honorable traditions of cowboy living.

16%off
The Cider House Rules
$8.40 Super Savings
Add to Cart