The wonder film of the century, about the most romantic figure who ever lived! 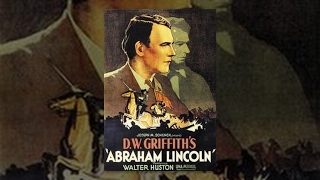 Silent film master D.W. Griffith's first talkie works as a companion piece to his classic BIRTH OF A NATION, providing a detailed biographical sketch of the 16th president. We see his birth in a log cabin, the tragic death of his first love, Ann Rutledge (Una Merkel), his debates with Douglas, his accepting of the presidency, the terrible toll of the Civil War, and finally the tragic assassination at Ford's Theater. Griffith shows his usual meticulous attention to period detail, and the framing of the various vignettes has the feel of historical photographs come to life. Walter Huston is excellent in the title role, with a portrayal that subtly evolves from laconic, wizened rascal to noble elder statesman. This is a fascinating, worthy film, and an interesting historical document in and of itself.

Significant for many reasons, not the least of which is that this is Griffith's first talkie as a director. Tracing the life of the president from his humble birth to his career in politics, Griffith's portrait is factual and sincere--with a stand-out performance by Walter Huston (father of John and grandfather of Angelica) as Lincoln.

The Bourne Supremacy
$7.98 on Sale
Add to Cart

25%off
Donald Trump - National Embarrassmints
$2.98 on Sale
Add to Cart