Things aren't always what they seem... 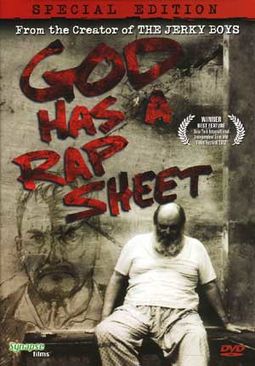 GOD HAS A RAP SHEET, the critically-acclaimed directorial debut from Grammy nominated Kamal Ahmed (The Jerky Boys), is a powerful drama mixed with mystical undertones. Eight men from different ethnic backgrounds all end up spending the night in a filthy holding cell in New York City? and they are not alone. Also inside the cell is an old man (John Ford Noonan, FLIRTING WITH DISASTER) who claims to be God.

Eight very different men of all races and creeds end up in a dingy holding cell in New York for one night, accompanied by a mysterious, grizzled homeless man who claims to be God (John Ford Noonan). As the night progresses the disparate backgrounds and beliefs of the prisoners make themselves heard as the men begin to argue, the subjects running the gamut of controversial issues surrounding race, religion, and sex. God attempts to mediate until an ancient evil being pays a visit toward morning. Kamal Ahmed of The Jerky Boys takes a drastic new turn with this powerful mix of comedy, drama, philosophy, and theology, which won Best Feature at the 2002 New York International Independent Film and Video Festival.