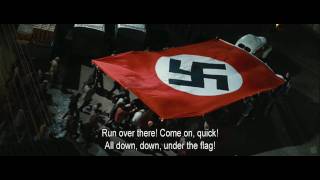 Oscar-winning director Florian Gallenberger explores the crucial role that foreigners played in helping countless Chinese escape a fate worse than death in this period docudrama concerning the 1937 invasion of Nanking by the ruthless Japanese Imperial Army. Casually known by historians as the "Rape of Nanking," the relentless assault on the then-Chinese capitol found countless men, women, and children slaughtered with a ferocity that shocked the entire world. Yet, despite the violence that surrounded them, some people refused to sit by silently as the innocents perished. One of those people was German engineer and Nazi party member John Rabe, who earned the nickname "The Schindler of China" for constructing a vast safety zone in which nearly a quarter of a million civilians sought sanctuary. Ulrich Tukur, Daniel Brühl, Dagmar Manzel, and Steve Buscemi star.