What are you prepared to do?

Different formats available:
The Untouchables (Blu-ray) for $12.80
91% recommend us! 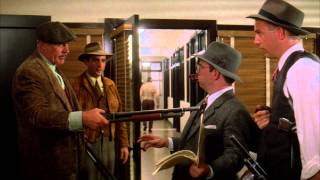 Kevin Costner is idealistic federal agent Eliot Ness, whose assignment to clean up Prohibition-era Chicago leads to violence and manly questions about upholding the law. Initially powerless to stop the flow of booze into the city (the police force is corrupt and everyone in town seems to be on the mob's payroll), Ness finds guidance from an older streetwise cop (Sean Connery, who won an Academy Award for this role) who convinces him he'll need to break some rules if he wants to bring down head mobster Al Capone (Robert De Niro). Andy Garcia and Charles Martin Smith play Ness's other recruits, who together must stand tall against a city full of assassins. Director Brian De Palma (MISSION: IMPOSSIBLE) packs the film with violence and creative camera movements while David Mamet's intelligent script capably dodges cliché at every turn. There's a real sense of what's at stake for these characters on a personal level, which contrasts nicely with the futility inherent in enforcing Prohibition in the first place. The film is based on the autobiographical book by Ness (cowritten with Oscar Fraley) and the 1959-63 TV series; Ennio Morricone (THE GOOD, THE BAD, AND THE UGLY) composed the uninhibitedly bombastic score.

Booze is illegal and people are dying for it. Federal Treasury agent Eliot Ness is determined to bring down Chicago gangster Al Capone and his bootlegging empire. Ness assembles his team and the bullets fly--but it doesn't stop the Untouchables from taking a swig from a bullet-riddled whiskey cask now and then. Academy Award Nominations: 3, including Best Art Direction. Academy Awards: Best Supporting Actor--Sean Connery.