Truckers encounter murder and mayhem in this inspired comedy classic. 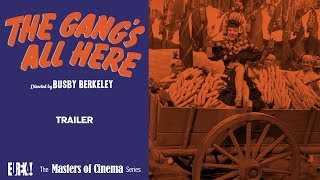 THE GANG'S ALL HERE Trailer (Masters of Cinema)

Frankie (Frankie Darro) and Jeff (Mantan Moreland) answer a newspaper advertisement looking for drivers, unaware that the trucking company is the target of ruthless saboteurs who will stop at nothing to kill them.

This freewheeling adventure features the hilarious teamwork of Mantan Moreland and Frankie Darro and is notable for an appearance by Charlie Chan's number one son, Key Luke, who had just recently starred in Monogram's Phantom of Chinatown and co-starred as Kato in The Green Hornet serial (both 1940).

When a trucking business starts having trucks hijacked and run off the road by a vicious competitor, Frankie tries to stop them.

Rivalry | Organized Crime | Vintage | Crime
This product is made-on-demand by the manufacturer using DVD-R recordable media. Almost all DVD players can play DVD-Rs (except for some older models made before 2000) - please consult your owner's manual for formats compatible with your player. These DVD-Rs may not play on all computers or DVD player/recorders. To address this, the manufacturer recommends viewing this product on a DVD player that does not have recording capability.

Customer Rating:
Based on 32 ratings.


YOU GOTTA LOVE ANYTHING WITH MANTAN MORELAND IN IT.

Bruce Springsteen
Western Stars (Blu-ray)
$32.39
Out of Stock
Save for Later