Neil Young This Note's For You 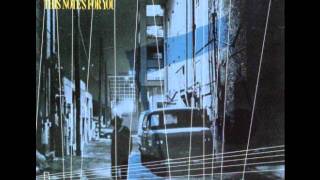 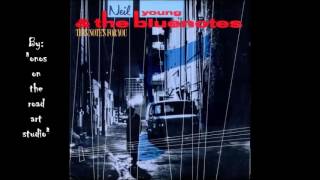 Personnel: Neil Young (vocals, guitar); Ben Keith (alto saxophone); Steve Lawrence (tenor saxophone); Larry Cragg (baritone saxophone); John Fumo, Tom Bray (trumpet); Claude Caillet (trombone); Frank Sampedro (keyboards); Rick Rosas, George Whitsell (bass); Chad Cromwell (drums); Steve Onuska (tambourine).
Additional personnel: George Whisell (bass); Ralph Molina (drums); Steve Onuska (tambourine).
Recorded with the Record Plant Remote Truck at Studio Instrument Rentals Stage 6, Los Angeles, California; The Omni, Oakland, California; Redwood Digital, San Francisco, California.
THIS NOTE'S FOR YOU, cut with a makeshift 10-piece R&B horn band, was the last of the sometimes mysterious, sometimes befuddling genre experiments that carried Neil Young through the 1980s. It features a jump-bluesy theme song ("Ten Men Workin"), some smoky ballads ("Coupe De Ville"), some faux-Chicago blues ("Married Man"), some upbeat Sam & Dave-y soul ("Sunny Inside") and, well, you can figure out the rest, it being a genre album and all. It being a Neil Young album, it also features what may be the great protest song of the '80s--the title track, which is about commercial sponsorship of rock music and which says in one verse what it took Bruce Springsteen and John Mellencamp five years' worth of interviews to articulate: "Ain't singin' for Pepsi/Ain't singin' for Coke/I don't sing for nobody/Makes me look like a joke." And if you're wondering where Young got the idea for his next great protest song, "Rockin' In The Free World," which appeared on his next album, look no further than "Life In The City," on this one.