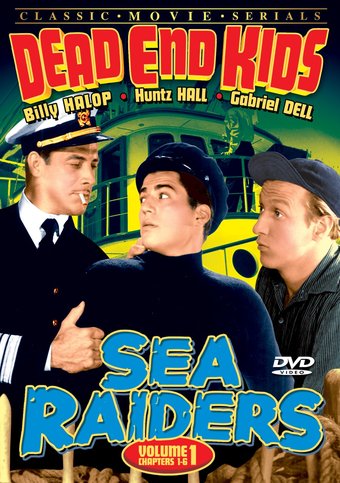 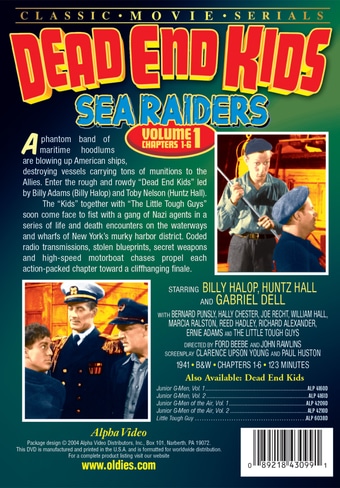 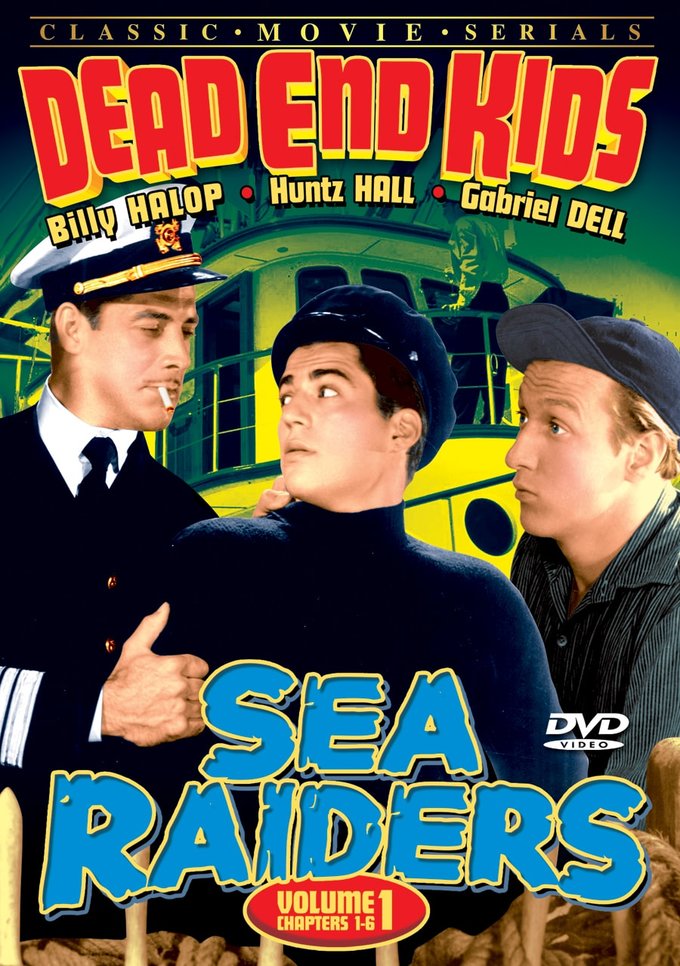 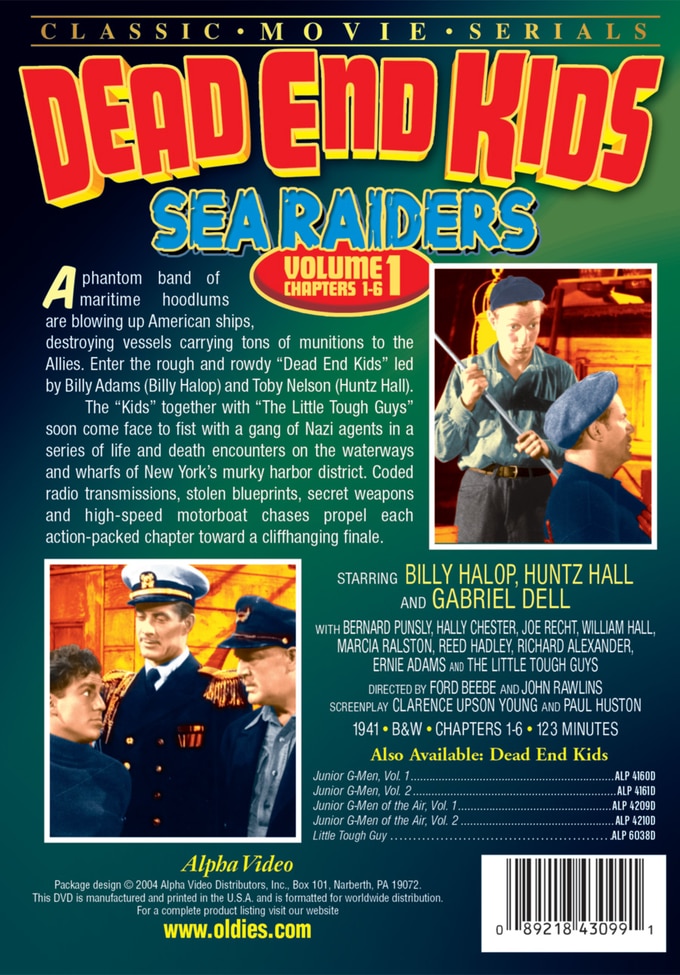 A phantom band of maritime hoodlums are blowing up American ships, destroying vessels carrying tons of munitions to the Allies. Enter the rough and rowdy "Dead End Kids" led by Billy Adams (Billy Halop) and Toby Nelson (Huntz Hall). The "Kids" together with "The Little Tough Guys" soon come face to fist with a gang of Nazi agents in a series of life and death encounters on the waterways and wharfs of New York's murky harbor district. Coded radio transmissions, stolen blueprints, secret weapons and high-speed motorboat chases propel each action-packed chapter toward a cliffhanging finale.

The Dead End Kids stop a gang from launching a new kind of torpedo boat to dominate the seas.

Adventure | Thieves | Gangs | Justice | Vintage | Serial
This product is made-on-demand by the manufacturer using DVD-R recordable media. Almost all DVD players can play DVD-Rs (except for some older models made before 2000) - please consult your owner's manual for formats compatible with your player. These DVD-Rs may not play on all computers or DVD player/recorders. To address this, the manufacturer recommends viewing this product on a DVD player that does not have recording capability.


A mysterious saboteur known as the "Sea Raider" has been destroying Allied merchant ships. Four wharf rats (Billy, Toby, Bilge, and Butch, played respectively, if not respectfully, by Halop, Hall, Dell, and Punsly) try to find out who the Sea Raider is. Meanwhile, Billy's big brother has invented some really nifty stuff, including a new type of torpedo boat, that the Sea Raider wants, and big brother works for Captain Carlton, who is really the Sea Raider, so there's all kinds of chicanery going on, and aren't you sorry you asked?

Reed Hadley, who played the lead in the great ZORRO'S FIGHTING LEGION (1939), must've done something terrible in his life, because only two years after that he's reduced to playing stooge for the Dead End Kids. He's an extremely unbelievable foreign agent; they may as well have signed Kate Smith to play a Nazi. There're a lot of other people in this serial, but for the sake of any good performances they may have given elsewhere, I won't mention them. Except for William Hall. Him I want to hurt. He plays a combination harbor cop and truant officer, he's dating somebody's sister (I forget whose, and it doesn't matter anyway) and he's a big, dumb, stupid clod and I hate him. And if you think I'm being too harsh, well, you should just see him. This isn't much of a chapterplay to begin with; we don't need some buttinsky copper hobbling around, spoiling what little quality in the film there is to begin with.

Most Universal serials run out of gas in the late going, and this one is no exception. The Universal chapterplay writers seem to try and jumpstart the stalled plot (or, more likely, they've simply lost any vestige of sobriety) in the final few episodes, and take the serial in a weird direction, and that's just what happens here. In chapter 8, the Boys are shanghaied by a whaling ship and nearly drown when they get caught in a harpoon's rope. In chapter 9, Halop gets eaten (nearly) by an octopus. In his underwear. That is, Halop, not the octopus, is wearing underwear. He took his clothes off for no apparent reason (all of the other Kids kept their modesty) except to match some antediluvian stock footage. In chapter 10, the Kids, shipwrecked on an island, get eaten by a panther. Nearly. I think they get away by smacking him on the nose with one of those concrete-like pretzels I used to buy from a street vendor in Manhattan at the entrance to the 3rd Avenue subway.

Wow. I got so wrapped up in the plot that I nearly forgot you all were still here. I will give you a special reward for staying with through so much blithering nonsense: I'll wrap up the review now. Or nearly now. I have to tell you my favorite part of the serial: the soundtrack. Folks, you've GOT to hear this. Whereas most Universal serials of the period simply reuse the score from BRIDE OF FRANKENSTEIN and other horror hits, somebody at Universal thought it would be a good idea to play classical music during this chapterplay. And if that's not bad enough, the music was apparently just chosen at random. It's as if they had forgotten to create a score for it, simply grabbed a stack of classical 78s, and recorded them, willy-nilly. You won't believe your own ears as gentle, lilting Rossini tunes are played over fight scenes. You'll doubt your own sanity. You'll wonder why, lord, why, and so I'm going to give you the answer: Because.