Spin: 3.5 stars out of 5 -- "[With] heavy psychedelic guitar salvos and feral proto-punk snarling..." 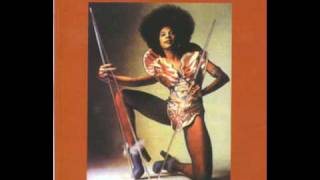 betty davis he was a big freak (Music Video) 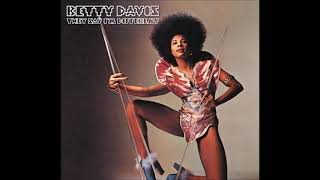 Spin - p.91
3.5 stars out of 5 -- "[With] heavy psychedelic guitar salvos and feral proto-punk snarling..."
Magnet - p.92
"[T]he hardest funk this side of prime James Brown....the brashest female voice ever to hit wax."
Down Beat - p.79
3 stars out of 5 -- "[The album] shows off her scalpel-sharp ability to slash her nasty repartee through great, massed grooved slammed down by her musicians."
Vibe - p.128
"[H]er delivery careens between fierce and kittenish, untouchable and vulnerable, aggressive and caustic....Those deadly dichotomies were a source of power for Davis both musically and as a muse."

The remarkable cover photo presents 1970s funk singer Betty Davis as a sort of Glamazon huntress, complete with stacked heels and a majestic afro. The contents of Davis' second album, originally released in 1974, are every bit as provocative: THEY SAY I'M DIFFERENT is the libidinous Davis's most sexually charged album by some distance, with songs like "He Was A Big Freak" and "Don't Call Her No Tramp" detailing sexual fetishes and prostitution in plain-spoken detail. The bottom-heavy synthesizer and clavinet-based arrangements and production sound quite similar to what George Clinton was doing with Parliament and Funkadelic during this period. The 2007 reissue on Light In The Attic Records adds four alternate versions.

50%off
Billy Ocean
Tear Down These Walls
$7.49 Super Savings
Add to Cart

54%off
The Spinners
From Here To Eternally
$5.99 Super Savings
Add to Cart