A fashion photographer is stranded on a remote island with beautiful women and turns into a monster after being bitten by a giant spider. 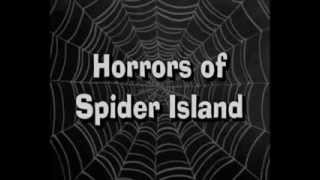 A team of chorus girls find themselves caught in a deadly web when they are shipwrecked on a remote South Seas island. The lush, tropical isle seems an ideal place to await their rescue, but hidden in the jungle are giant poisonous spiders. A venomous bite transforms the girls' escort into a disfigured beast, half-man and half-insect. Consumed with lust and craving blood, the monster hunts down the defenseless girls and slaughters them one by one. The ensuing panic drives the dancers to squabble and fight among themselves until they realize that their only hope for survival is to work together in a final stand against the monster.

Originally released in West Germany with the title Ein Toter hing im Netz, this campy sexploitation film uses every trick in the book to sneak a peek at its heroines' nubile bodies.

When a planeload of models crash-lands on a tropical island, they are forced by the heat and humidity to peel off most of their hot, sticky clothing. That evening they find a giant spider web with a dead scientist caught in it, but this doesn't stop their talent manager from taking a late-night walk. In great monster movie tradition, it's not long before he is bitten by a spider and begins to change into a hairy crab-like giant spider. And really, is there anything a giant spider creature on a desert island likes better than a planeload of models' Super schlock-o.

Customer Rating:
Based on 4540 ratings.


First off, while this movie title has the word 'horror' in it, this movie is not scary at all. In a nut shell, it's a movie about a group of woman and one guy stranded on an island and the guy gets bit by a large spider and turns into an ugly beast (that really doesn't even resemble a spider) and tries to attack them. If you're in the mood for a good laugh or two at a B movie, then check this one out. Just don't get your hopes up for a horror movie.


The movie description provided is indeed accurate, they use every trick in the book to sneak a peek at the girls. Then when they use all the tricks in the book they start writing down new ones in crayon on a bar napkin. It often gets ridiculous, like one girl doing a seductive shimmy for the bushes.

Of course, this movie goes beyond mere sexual display and into outright full-fledged misogyny to display all women as a bunch of helpless, submissive, servile, child-like murmuring idiots incapable of acting on there own, with Gary telling them when to eat, when to get dressed, when to go to bed, and probably would tie their shoes for them if they wore any.

Poor Gary however gets bitten by a radioactive spider, and becomes 0.000002% spider, winding up with vaguely clawed fingers, a weird face, and an actual reduction of back hair, the rest of him remaining blatantly human.

Fortunately some men arrive, but, suprise suprise, one of them is a proverbial player, treating each and every one of the girls like yammering blow-up dolls and then physically assaulting his companion when he tries to defend one of the poor girls.

Despite this, I still find the entire soundtrack laughable, the music always remaining in full jazzy wacky swing, never really aware that something scarey is supposed to be happening.


The above synopsis by Alpha video is righton the Money but Oy Vey! did they neglect to tell you what a hysterical piece of vintange trash this is. If you dig Cheez, then bring out the wine and invite some friends over for a viewing of this. The last timeI showed it at a party everyone was howling! not to be missed by drive in movie lovers who would actually rate it at 4 stars for stink appeal. Other companies put this title out for more money and worse cover art so snap it up.