Overkill Under the Influence 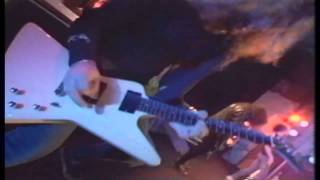 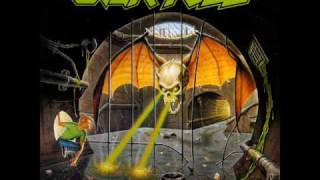 Personnel: Blitz (vocals); Bobby Gustafson (guitar, acoustic guitar, 12-string guitar, background vocals); Sid Falck (drums); D.D. Verni (background vocals).
Audio Mixer: Michael Wagener .
Recording information: Pyramid Sound Studios, Ithaca, NY (03/1988-04/1988).
Illustrator: Rich Larson.
Photographers: Dan Muro; Ron Akiyama; Frank White .
Originally released in 1988, Under the Influence is another confident, if unremarkable Overkill recording. Highlights include the punk-ish "Overkill III (Under the Influence)," as well as trademark pseudo-thrash numbers like "Shred," "Never Say Never," and the minor hit single/video "Hello From the Gutter." One subtle, but very consistent problem with Overkill's brutal riffing sticks out just a little bit more than usual on Under the Influence. That is, the clanky ringing and exaggerated attack of bassist D.D. Verni's instrument. Verni bogs down the group's sound, weakening Overkill's otherwise tight and unified rhythmic signature. As usual, the real problem with Under the Influence is vocalist Bobby "Blitz" Ellsworth's overdone vocals. Ellsworth is a singer of rare ability, but his cartoon approach takes Overkill way over the top, eroding the band's technically impressive, musical base. But despite this consistent challenge to their listenability, Overkill still cranks out their own brand of first-class metal on Under the Influence, a record that, while respectable, might only interest the most passionate fans of the band. ~ Vincent Jeffries