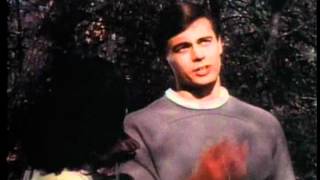 Two young lovers necking in the park are viciously attacked by a terrifying monster! Investigating a rocket crash, Sheriff Clint Crawford (John Agar), learns of the deadly assault. His partner is brutally murdered by the hideous creature and the sheriff barely escapes with his life. The rampaging mutant stalks the countryside seeking new victims as Crawford desperately tries to end the carnage.

The cast (including John Agar) and the crew of this Texas made feature consisted of many of Larry Buchanan's (Zontar, The Thing From Venus, Curse Of The Swamp Creature) repertory company.

When two young lovers are viciously attacked by a hideous monster, Police Sheriff Clint Crawford finds a rocket has mysteriously crashed. Soon, the sheriff realizes that there may be a connection, but it's too late for Crawford's partner who becomes yet another victim. It's now human wit versus monster instincts as Sheriff Crawford devices a plan to rid of the creature and save the town.

Monsters | Theatrical Release
This product is made-on-demand by the manufacturer using DVD-R recordable media. Almost all DVD players can play DVD-Rs (except for some older models made before 2000) - please consult your owner's manual for formats compatible with your player. These DVD-Rs may not play on all computers or DVD player/recorders. To address this, the manufacturer recommends viewing this product on a DVD player that does not have recording capability.