The Doors Live at the Bowl '68 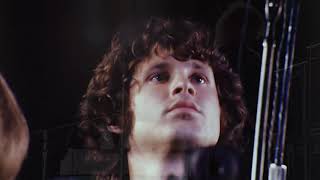 Personnel: Jim Morrison (vocals); Robby Krieger (guitar); Ray Manzarek (keyboards); John Densmore (drums).
Audio Mixer: Bruce Botnick.
Liner Note Authors: John Densmore; Ray Manzarek; Robby Krieger; Bruce Botnick.
Recording information: Hollywood Bowl (07/05/1968).
Photographer: Henry Diltz.
Two years after the Beatles rolled out the hits for the final time further up the West Coast at Candlestick Park -- and over a year into a Rolling Stones touring hiatus -- the Doors played a set at the Hollywood Bowl that is widely regarded to be their finest ever captured on film. Although they weren't necessarily filling a gap on the live circuit left by their contemporaries -- with their third album, Waiting for the Sun, already in the can and under a week away from release -- it's clear from this recording that they were keen to impress the 18,000 people who filled the Bowl on July 5, 1968. It's a tight, musically impressive, well-paced set that falls at that sweet spot in the Doors' career, between the laid-back hesitancy of early club performances -- such as those found on Live at the Matrix '67 -- and the often overblown, strident, and bluesy improvisation of later gigs like the two-hour plus 1970 set released as Live in Detroit. Here, the band are well-rehearsed, locked-in, and ooze intensity with Bruce Botnick's expert remastering giving John Densmore's dexterous drumming a more prominent focus than it has previously been warranted. It's not just improved sound that we benefit from here, either. As Jim Morrison's vocals were not originally captured for large chunks of "When the Music's Over," "The Wasp," and "Hello, I Love You," Botnick has managed to reconstruct his vocals from recordings that were made in preparation for the Absolutely Live album. Furthermore, while 1987's Live at the Hollywood Bowl lasted 22 minutes, here we get the entire set: over an hour of music. Live at the Matrix '67 might have displayed the breadth of their repertoire in a club environment -- cherrypicking the best performances from four nights' worth of material -- but Live at the Bowl '68 is by far the best one-disc Doors concert available to date. From Morrison's primal scream and the explosive drum fill that kickstarts "When the Music's Over," they play to the back of the Bowl, and in turn get the back of the Bowl to lean in a little on the more introspective, tempered passages of "Light My Fire" and "The End" that appear toward the latter part of the set. Although the Doors built on the drama that was inherent in the music of the Beatles and the Stones, neither of those acts could match their unequivocal gift for portraying mystery and intrigue on record, or for that matter, in a live context. While Mick Jagger -- who looked on from the front row -- stayed in L.A. for the rest of month to oversee the final mix of the Stones' satanic blues rock cornerstone Beggars Banquet, Paul McCartney was back in London that night adding the bassline to "Ob La Di Ob La Da." The Doors returned to perform at the Hollywood Bowl in September 1972, very sadly without Morrison. ~ James Wilkinson

20%off
The Doors
Weird Scenes Inside the Goldmine
$15.98 on Sale
Add to Cart