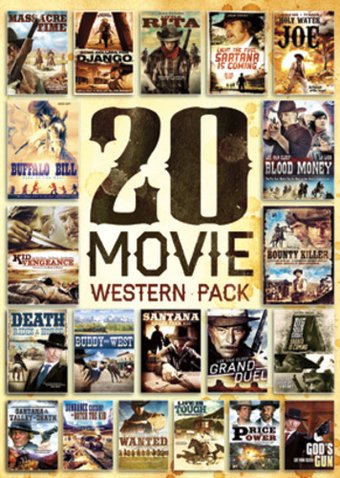 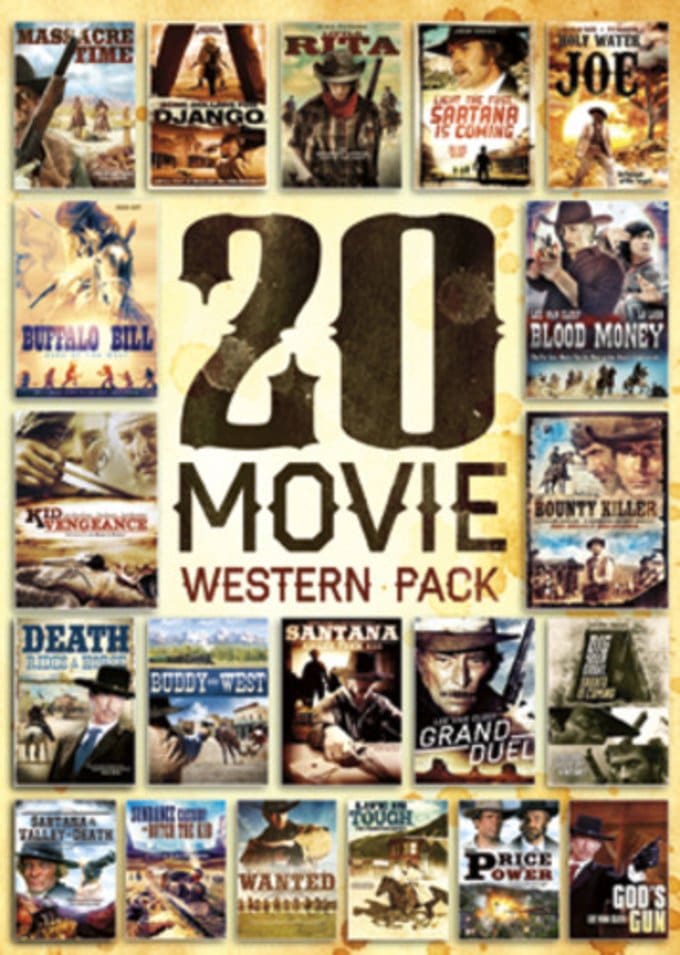 They collect their bounties and uphold the law. They search for fortune and protect their families. The genre's biggest stars do it all in these 20 cowboy classics. Packed with shootouts, showdowns and the occasional slapstick, Western fun is right around the corner in this must-have collection.

MASSACRE TIME: Tom Corbett is called home where he discovers that the powerful Scott family has taken over the town.

SOME DOLLARS FOR DJANGO: When a band of crooks rob a bank, a bounty hunter named Regan is hired to take them out. With the ring leader still at large, Regan poses as a sheriff to get closer to his target.

LITTLE RITA: A feisty female gunslinger tries to rid the world of evil by stealing and destroying all the gold.

LIGHT THE FUSE, SARTANA IS COMING: Sartana sets out to find gold hidden in the town of Mansfield and ends up teaching his enemies just what it's like to face him in a showdown.

BLOOD MONEY: A scheming thief (Lee Van Cleef) gets mixed up with a Chinese man's hidden treasure and is recruited by a young Kung-Fu student to help hunt down the missing inheritance.

KID VENGEANCE: Distraught by the murder of his parents and the kidnapping of his sister, a teenaged boy enlists the help of a gunslinger to seek revenge. Starring Lee Van Cleef.

THE BOUNTY KILLER: An escaped convict and a ruthless bounty hunter face off in a dangerous and violent showdown where the fastest gun will win.

DEATH RIDES A HORSE: Bill-a witness to the robbery and murder of his parents when he was just a boy-embarks on a quest to hunt down the gang responsible. Starring Lee Van Cleef.

BUDDY GOES WEST: A drifter, mistaken for a doctor, takes on his new role while also trying to protect the town of Yucca from a band of outlaws.

SANTANA KILLED THEM ALL: A pair of outlaws are on the hunt for some loot they know is missing from a robbery, outsmarting and killing anyone who tries to foil their plans.

GRAND DUEL: Lee Van Cleef stars as the gritty Sheriff Clayton, a wronged man on the right side of the law who teams up with a fugitive to bring down a corrupt family.

DIG YOUR GRAVE, SABATA IS COMING: After seeking revenge for his father's death, Steve McGowan and his bandito friend, León, find themselves on the run from the famous outlaw hunter, Sabata.

SARTANA IN THE VALLEY OF DEATH: Outlaw Lee Calloway breaks three bandit brothers out of jail in exchange for part of their stolen gold...but is forced to fight back when they don't hold up their end of the deal.

SUNDANCE CASSIDY AND BUTCH THE KID: Estranged brothers Monty and Ted Mulligan must live together for six months in order to cash in on their inheritance.

WANTED: A newly-appointed sheriff is framed for murder, forcing him to prove his innocence and fight for his freedom.

LIFE IS TOUGH, EH PROVIDENCE?: In this Western comedy classic, an eccentric bounty hunter uses the same crook to collect rewards in each state.

THE PRICE OF POWER: Bill Willer, a former soldier and skilled gunman, discovers an assassination plot and must expose the truth to save the life of an innocent man.

GOD'S GUN: When Father John is viciously gunned down, a gang takes over Juno City. A young man searches for Father John's twin brother to help save the town.