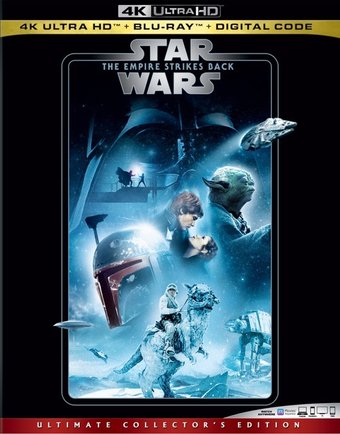 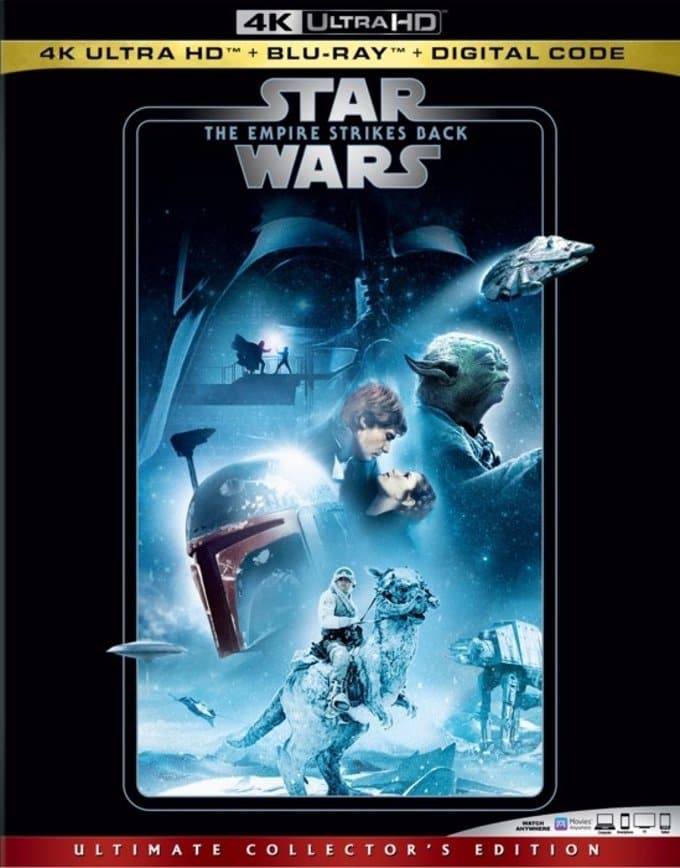 "Beware of the Dark Side."
- Yoda (Frank Oz) to Luke Skywalker (Mark Hamill)
"The Force is with you, but you are not yet a Jedi Knight."
- Darth Vader (played by David Prowse, voiced by James Earl Jones) to Luke

Considered the most morally and emotionally complex of the original Star Wars trilogy, THE EMPIRE STRIKE BACK continues creator George Lucas's epic saga where STAR WARS: A NEW HOPE left off. The Rebel Forces--which include young adventurer Luke Skywalker (Mark Hamill), rogue pilot Han Solo (Harrison Ford), and the beautiful but seemingly humorless Princess Leia (Carrie Fisher)--have been successful in destroying the Evil Empire's Death Star. However, the Empire's top commander, the terrifying Lord Darth Vader (played by David Prowse, voiced by James Earl Jones), is scanning the galaxy for the Rebels' secret location. After a visually stunning showdown on the ice planet Hoth, the Rebels are forced to flee, and Luke separates from Han and Leia. Masterful storytelling weaves multiple, archetypal plotlines that pit Vader against Han and Leia as he desperately attempts to capture Luke for political--and, secretly, personal--reasons. Luke, meanwhile, finds himself under the tutelage of the tiny but powerful old Jedi Master Yoda, who teaches him the ways of the Force and warns the impatient but talented student against the threat of the Dark Side. Greek tragedy meets a philosophical hero's journey in EMPIRE, a remarkable sci-fi epic in which the performances are as powerful as the spectacular special effects.

In 1997 a special edition of the film was digitally remastered with enhanced visual and sound effects. Several scenes--including the one in which Luke Skywalker encounters a deadly Wampa on Hoth--were reedited with more detail while other scenes--such as the one on Cloud City--were added for the rerelease.

In this stirring sequel to STAR WARS, the forces of the Rebel Alliance are under constant attack from the Galactic Empire as Luke travels to the planet Dagobah to learn the secrets of the Force from the last great Jedi Master, Yoda. Han and Leia must evade the forces of the Empire while Luke draws ever closer to Darth Vader and his destiny. Academy Award Nominations: 4. Academy Awards: 2, Best Sound, Special Achievement Award for Visual Effects.