I Bury the Living

A cemetery manager discovers he has the psychic power to kill in this tale of murder and madness. 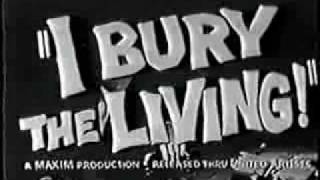 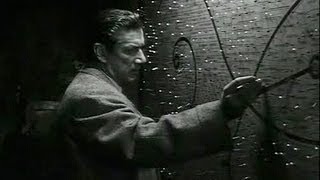 Joe Dante on I BURY THE LIVING (Featurette)

Robert (Richard Boone), the manager of a cemetery, begins a torturous descent into insanity when people owning grave plots begin to die at an alarming rate - seemingly by his hand. On the graveyard grounds map, a black pin in a plot means death, white means life. When the pins get mixed up and strange accidents happen, Robert believes he has the power of life and death. In a hideous experiment the manager resurrects the newly buried, culminating in a night that leaves him in a state of frenetic dementia pursued by a murderer! Filmed in nine days on location at an LA cemetery, I Bury The Living is a psychological horror film with with supernatural overtones and striking expressionistic production design by Edward Vorkapich. This movie reflects the inner mind of a man losing his grip on reality.

The new manager of a cemetery (Richard Boone) begins to question reality when he places black pins instead of white in the cemetery map, seemingly causing the owners of the plots to die. As the death count rises, the mystery gets deeper and deeper, pointing to a resolution almost too strange to face. An overlooked classic of the genre.

Carnival of Souls
$10
Add to Cart

Customer Rating:
Based on 4178 ratings.


This is a little gem of a movie and one of my most watched horror films! I already have the MGM version and this one by Alpha Video is just as good, and for under $6 you can't go wrong! The picture and sound are both very good and the package is very nice indeed, buy a copy now!!!


This had the makings to be one of the scariest things ever put on film, a psychological drama about a man who discovers he has a power that no one else has and his struggle to come to terms with it. Alas, the studio got cold feet.
Let me explain. Richard Boone is a businessman who has to take his turn as caretaker of a local cenetray. All his family and friends have plots there and the map of the grounds is dotted with white pins for empty graves and black pins for occupied one. One day by accident Richard puts a black pin into an empty grave marker and the person who owns the grave dies! Thinking this is only a coincidence Richard goes on about his work until he makes the same mistake a second time and another person dies! The supersititous groundskeeper Andrew (Theodore Bikel) suggests that Richard has the power to bring death by force of will. His friends all scoff at the idea and to snap the man out of it they all demand he put black pins into their grave markers. Bad idea! With the body count growing police think Richard might be murdering his business partners. Is that the case, or there something even more terrible behind it all?
The original ending had Richard pulling out the black pins and puttings white ones in their place. This made the dead people rise out of their graves and surround him in his office and call him to join them. Richard sees them and dies of a heart attack. Okay, that was the ORIGINAL ending! The studio changed it for a more "reasonable" explanation and (to me anyway) wrecked everything that had gone before.
Oh well, as it is the film is a fairly decent mystery. Personally I wish they had left well anough alone though.