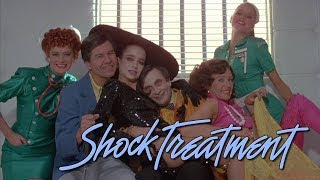 The musical madness and mayhem continue in this sumptuous "sequel" to The Rocky Horror Picture Show - on DVD for the first time ever!

In the continuing adventure of Brad and Janet Majors (Cliff De Young and Jessica Harper), their suburban hometown, Denton, U.S.A., has been transformed into a giant TV studio, where the brainwashed citizens remain happily glued to an endless series of soap operas, variety acts and game shows. But before you can say, "We'll be right back after this," the station's unscrupulous sponsor has locked Brad up in a mental hospital and recruited Janet to be the sexy star of her own hit show. Stay tuned for a shocking lineup of maniacal characters, biting satire and all-out fun!

A young couple appear on a campy game show called "Marriage Maze," and the result is as bizarre as it is disastrous. The show's lecherous host abducts the young woman, and sends her boyfriend to an insane asylum. An appropriately strange follow-up to the cult classic, THE ROCKY HORROR PICTURE SHOW.