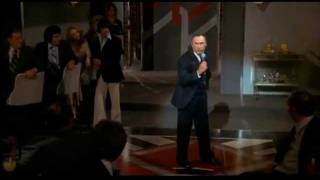 In this outrageous homage to Hitchcock thrillers, Mel Brooks plays renowned Harvard psychiatrist Dr. Richard Thorndyke, a nut-job with a paralyzing fear of heights, who's just become head of the Psycho-Neurotic Institute for the Very Very Nervous. After the jittery doc learns that his predecessor died under suspicious circumstances, he looks for help from his resentful associate (Harvey Corman) and his evil head nurse (Cloris Leachman) who, not surprisingly, offer no help. To make matters worse, events take a murderous turn, and Thorndyke is accused of a crime.Co-starring Madeline Kahn, High Anxiety is considered one of Brooks' best.

In this perceptive, sidesplitting homage to Hichcock films, director, star, and writer Mel Brooks plays the average American guy, psychiatrist Richard Thorndyke (as in Roger Thorndike, Cary Grant's character in NORTH BY NORTHWEST), who's terrified of heights (think VERTIGO). He becomes the new chief of the Institute for the Very Very Nervous, where things are not what they seem, and it's not long before Richard finds himself embroiled in murder, deception, and other hilarious situations. While Brooks plays the quintessential innocent man accused, Madeline Kahn is perfect as his Hichcockian icy blonde love interest, Victoria Brisbane. It is perhaps Cloris Leachman, though, who is at her most deviantly funny as Nurse Diesel--a kind of cross between her Frau Blucher character from YOUNG FRANKENSTEIN and Nurse Rached from ONE FLEW OVER THE CUCKOO'S NEST. HIGH ANXIETY is a treat to watch just to spot the Hitchcock parodies/homages, as Brooks amiably spoofs some of the suspense master's most famous scenes, including hysterical takeoffs of THE BIRDS and PSYCHO. HIGH ANXIETY is one of Mel Brooks's most consistently entertaining films.