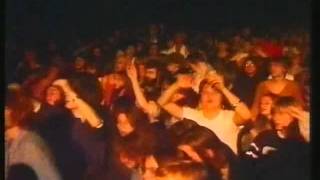 SLY & ROBBIE recruited the American rock guitarist Daryl Thompson ( 2014) whom they knew from their time with PETER TOSH. They engaged the keyboardist Franklyn Bubbler Waul who was however not allowed to play the reggae typical shuffle organ but to steadily thrash the offbeat onto the piano. Those two musicians who were being replaced at several shows with Keith Sterling and Mikey Chung formed the core of BLACK UHURU which together with a second guitarist and a percussionist also dominated the stage in Essen. Sly's varied drum patterns, Robbie's bass drive, the straight offbeat and Thompson's warped guitar licks were a combination that never had been heard like this in reggae before, a hypnotic wall of sound as basis for the revolutionary Rastafarian lyrics of Michael Rose, Puma Jones and Duckie Simpson, now and then interrupted by surprising echo effects. After their performance at ROCKPALAST, BLACK UHURU enjoyed worldwide success including three more albums (Red, Chill Out, and Anthem). Then, Michael Rose no longer wanted to go on - allegedly because of jealousies from Duckie Simpson - and was replaced with Junior Reid. The new outfit managed to create two more UK Top 10 hits with the songs 'Fit You Haffe Fit' and 'The Great Train Robbery' and released the albums Brutal and Positive. In 1990 Puma Jones died; SLY& ROBBIE retreated. Duckie Simpson who held the rights to the name BLACK UHURU carried on with the project, reactivating the founders Don Carlos and Garth Dennis and releasing Albums like Now and Iron Storm but remained far from the bands' success of the 80's. Matching the trend, dub mixes were released out of turn on top of several albums during the bands' hot phase Uhuru In Dub, The Dub Factor, Brutal Dub and Positive Dub, also each line-up released at least one live album. However, none of them possessed the quality and the energy of this ROCKPALAST performance in 1981.

New
The Mighty Mighty Bosstones
When God Was Great (Blk)
$21.10
Add to Cart