Mortimer On Our Way Home 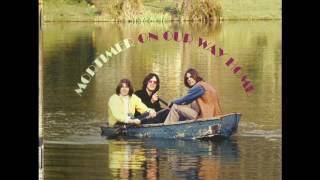 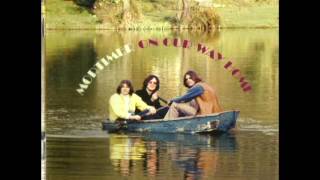 The New York trio Mortimer's self-titled first album from 1968 staked out very interesting territory for the times. Stripping their sound down to acoustic guitars and conga drums, they sang lovely pop-psych tunes in beautiful harmony. It was a gimmick that almost but not quite caught on, which led the band to seek greener pastures in London. Through a series of lucky breaks, they ended up signed to Apple Records by an enthusiastic George Harrison, and set up in London to record demos and rehearse while the producer assigned to them, Peter Asher, finished making another album elsewhere. When he returned, the trio had amassed a startling number of new songs, of which ten were chosen. Asher decided to put the full resources of Apple behind the band and called in vocal choirs, string sections, and horns, while handing the boys electric guitars and a full drum kit. Many of the songs still have the basic acoustic underpinnings of Mortimer, but a large chunk of them sounds like a completely different band. The nice melody of "You Don't Say You Love Me" is punctuated by horn blasts and sawing strings; "You Do Too" is given a jolt by a fuzz guitar running through it like stray current; "No Business Being Here" is one steel guitar lick away from sounding like a Jerry Reed track cut in Las Vegas. Even the tenderest ballad, "Dolly," is writ large and given an extra boost from a giant-sounding 12-member vocal choir. Mortimer finished the record, and while playing it for Apple execs they were told that Paul McCartney had a song for them. They added "On Our Way Home" (which became "The Two of Us" when the Beatles later cut it) at the last minute, and somewhat ironically gave it the most stripped-down production of all. The resulting album isn't exactly bad; many of the tracks are first-rate late-'60s pop and the group's vocals are very pretty throughout. The problem is that it lacks the immediate charm of their debut, as well as a few standout tracks like "Singing in the Sunshine" and "Would You Believe." The soulful, Association-like "I Didn't Know" is probably the best song here, and the fact that it sounds like another band rather than Mortimer sums up the album's problems. But none of it mattered at the time, since Apple decided at the last minute -- thanks to a budget crunch -- that they were canceling the album's release. It sat in the archives for almost 50 years before RPM Records finally issued it in 2017. With the full story behind the record in the liner notes and several tracks added on, On Our Way Home is an interesting curio from a lost age, if not quite a fitting follow-up to Mortimer, one of the true lost classics of the '60s. ~ Tim Sendra