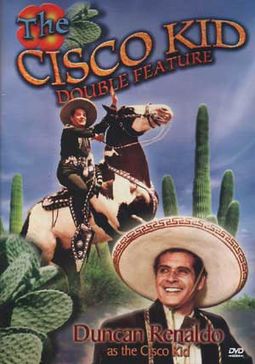 The Robin Hood of the West Rides Again!

Of all the heroes of the Old West, few are as well loved or as easily recognized as The Cisco Kid, based on O'Henry's famous character. Together with his bumbling but lovable amigo, Pancho, Cisco has entertained millions of children and adults for many years. This rough-in-tumble double-feature stars Duncan Renaldo as the dashing hero with Martin Garralaga and Leo Carrillo taking turns playing the ever-befuddled Pancho.

South Of The Rio Grande (1945): The daring duo go to the aid of a rancher friend and his neighbors, whose ranches are being terrorized by a ruthless dictator and a gang of horse thieves.

Two action-packed classic westerns featuring the ultimate adventurer of the Old Southwest and his trusty sidekick. Duncan Renaldo stars as the Cisco Kid along with Martin Garralaga and Leo Carrillo alternating as Pancho. Great western fun.