Two men are held hostage by a psychotic killer. 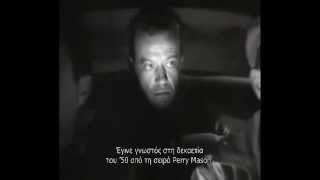 A fishing trip turns into a journey through hell when two men pick up a homicidal maniac by the side of the road. The hitch-hiker has left a bloody trail of death across the countryside. His latest victims are forced to drive him through the desolate wilds of Mexico as he tries to make a getaway. Knowing that they may be killed at any time, the two men desperately struggle to escape. Their captor psychologically tortures them, destroying any hope of survival. As their sanity unravels, the prisoners confront the madman in a final violent showdown. The Hitch-Hiker is a film-noir thriller and is one of director Ida Lupino's finest moments.

An acclaimed film noir thriller in which two vacationing men are held captive by a hitchhiking psychopath with one eye that never closes. Though years of more horrific violence and suspense have dulled its impact somewhat, it was way ahead of its time. Considered among Lupino's best work, this film was the progenitor of many, many films that would follow in its tire-treads and is a must-see.

Customer Rating:
Based on 9510 ratings.


Frank Lovejoy and Edmund O'Brien are in fine form as a pair of pals on a fishing trip who confirm the statement that "no good deed goes unpunished" when they pick up hitchhiker William Talmann, who is positively creepy in the role of Psycho Killer. Ida Lupino (director) did a fine job with "on location" and exteriors. A very fine example of film noir and a talented actor/director (and I do mean Lupino).


This is a real creepy movie based on a true story. It moves along quite well. Ida Lupino directed this film and did an excellent job,