Mojo (Publisher): 4 stars out of 5 - "[T]here's something substantial and instantly engaging about his music." 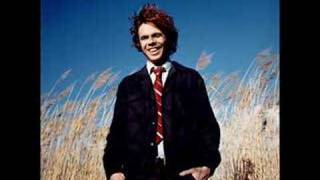 Uncut - 5/04, p.100
3 stars out of 5 - "[T]his 26-year-old Idaho native retains the folk-country purr of first album GOLDEN AGE OF RADIO, and there's an obvious debt to Dylan in the subtle phrasing."
Mojo (Publisher) - p.97
4 stars out of 5 - "[T]here's something substantial and instantly engaging about his music."

Personnel: Josh Ritter (vocals, guitar, violin); David Odlum (vocals, guitar, mandolin); Zack Hickman (guitar, lap steel, bass); Sam Kassirer (accordion, piano, Wurlitzer piano, Hammomd B-3 organ); Dave Hingerty, Darius Zelkha (drums).
Recorded at Black Box, La Dionnale, France on between February 17 and March 3, 2003.
Idaho songwriter Josh Ritter has received a lot of attention for his fine, spare songwriting and his no-frills approach to performance. As a result of his excellent debut album Golden Age of Radio, he's become a critic's darling all over the U.S. and a full-tilt pop star in Ireland. He's like a lot of young people who are shining stars upon arrival, except for one thing: the proof of his staying power is on Hello Starling, his sophomore effort for Signature Sounds. Over the course of 11 new songs, Ritter reveals that not only is he not a fluke, but he seems to have arrived on the scene fully formed. He writes with the wisdom of someone twice his age, and a sense of tender, subtle humor is as important to him as is his ability to write a personality sketch or even a love song. Recorded with Curtis Mayfield's old gear in a ramshackle French farmhouse over 14 days, Hello Starling is seemingly straight-ahead folk-rock recording that accents the more unobtrusive aspects of living in the modern world. Like Rufus Wainwright, Ritter takes the approach of being in each setting he writes about. His power of observance, not only for scenery and characters but subtle emotional states, is remarkable. He may be the guy in the story or a tree on the sidewalk, but he's there. And while his topics would not indicate being any big deal, they are quite simply profound. "Kathleen" is the story of a young man who waits on the sidelines at a party to get the opportunity to drive a young woman home. His protagonist is full of the shy, geek-love need of a bystander who has long desired a woman who doesn't even know he's alive. But rather than merely ache with the unrequited love he believes he is entitled to, he summons his bravado -- buoyed by a Hammond B3, ringing electric guitars, and a poetry that is as shot through with Kenneth Patchen's last romantic ideals as it is with Mike Scott's Celtic pop melodic sensibility -- and makes his stand under the moonlight. It's an anthem for the shy. "Man Burning" is a glimmering rocker with acoustic guitars in the forefront and the B3 careening over the lyrics. The story is about a man whose regrets are shackled to him, yet he seeks to transcend them with his passion for living and for regret. But there is also the tenderness of the poet, whose metalinguistic tome about writing ("Bone of Song") is heartbreakingly profound in its reverence for the craft and for the altar of the thing itself. Leonard Cohen would have been proud to write this song. Ritter's entire album can be summed up in the rocker "Snow Is Gone" when he sings "I'd rather be the one who loved than to be loved and never even know," with the kind of worldly wisdom Guy Clark has consumed himself with seeking over 30 years. Hello Starling is a step beyond Golden Age of Radio in craft, maturity, vision, and in kindness; it's one of the few recordings that has been released in recent years that will be being played a decade from now. Isn't that the true test of art, even when it's popular -- its endurance? ~ Thom Jurek

Josh Ritter
See Here, I Have Built You A Mansion
$12.70
Add to Cart

16%off
Josh Ritter
The Historical Conquests of Josh Ritter
$24.40
Add to Cart

Glenn Yarbrough
Come Sit By My Side
$5.98 on Sale
Add to Cart