Blame It on the Bellboy PG-13

Mix-ups, Mishaps, Madness, and Mayhem... It's all part of the service. 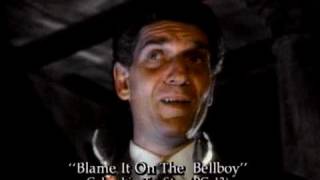 Blame It on the Bellboy Teaser

When a daffy bellboy at the Hotel Gabrielli in Venice, Italy, accidentally switches the itinerary envelopes for three hotel guests, he inadvertantly gives them travel plans they'll never forget.

A bumbling bellboy, working at a hotel in Venice, somehow manages to mix up the mail and messages of three of the hotel's guests: a mafia hitman, a timid realtor, and a vacationing lothario who's just set up a blind date with a sexy young woman. Comic hijinks ensue as a tangled and slightly dangerous series of blunders emerge from the three cases of mistaken identity.

Confessions of a Driving Instructor
$19.80 on Sale
Add to Cart

Once Upon a Crime
$13.10 Super Savings
Add to Cart