The Original Kings of Comedy R 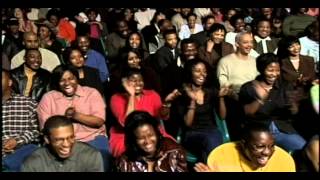 The Original Kings of Comedy - Trailer

When four of the world's funniest black stand-up comics came together to celebrate their crownings as the "Kings of Comedy," acclaimed filmmaker Spike Lee decided to film two of their most memorable shows. The result is THE ORIGINAL KINGS OF COMEDY, a raucous concert film that takes its cue from classic performers such as Richard Pryor and Eddie Murphy. The host of the evening, Steve Harvey, spends most of his time criticizing modern music--namely hip-hop--for forgetting to include love in its songs, missing the days when black music was passionate and romantic. D.L. Hughley focuses on universal topics such as work, as well as taking his time to criticize certain unfortunate audience members. Cedric "The Entertainer" makes a series of clever points about the differences between white and black people in addition to using his large frame to dance and run around the stage to hilarious effect. Capping off the film is Bernie Mac, a frustrated 42-year-old who is sick of sex and believes that people should tell it like it is, no matter whom they might offend. As funny as each individual is, they also take the time to make poignant observations about race, relationships, and popular culture, giving the film a sincerity that is truly refreshing.

With this feature-length documentary filmed the evenings of February 26 and 27, 2000, at the Charlotte (NC) Colleseum, Spike Lee captures the spirit of the "Kings of Comedy" tour, focusing on stand-up geniuses Steve Harvey, Cedric "The Entertainer," D.L. Hughley, and Bernie Mac. The tour began in 1997 and has since grown in scope and popularity to its present status as one of the highest-grossing and most highly lauded black comedy shows. However, until Lee stepped up to the challenge of documenting the tour on film, it was also a well-kept secret among its attendees. Now these "Kings of Comedy" and their high-volume acts can be enjoyed by audiences everywhere.