Living Blues: "[Bonamassa] firmly keeps one foot in the blues while reaching ahead for increasingly dynamic additions to his arsenal."

Get email alerts for Joe Bonamassa
118 ratings
Currently Out of Stock: We'll get more as soon as possible
Notify Me When Available
Add to Wishlist
Format:  CD
item number:  X9CK
91% recommend us! 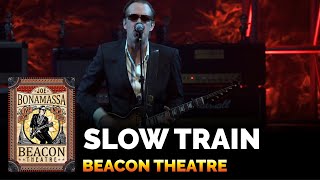 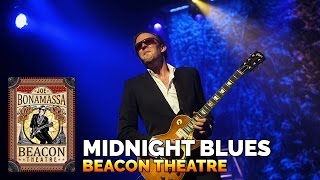 Living Blues - p.57
"[Bonamassa] firmly keeps one foot in the blues while reaching ahead for increasingly dynamic additions to his arsenal."

Personnel: Joe Bonamassa (vocals, guitar); Rick Melick (keyboards); Tal Bergman (percussion).
Audio Mixer: Kevin Shirley.
Recording information: Beacon Thaetre, New York City (11/05/2011).
Photographers: Mark Weiss ; Christie Goodwin; David Wexler; Dennis Friel; Kevin Shirley.
Joe Bonamassa is a guitar hero and a road dog -- the blues-rock crusher plays up to 200 shows a year, and it's significant that of the 15 albums he released between 2000 and 2012, four of them were live sets. When Bonamassa played the Beacon Theatre in New York City in November 2011, the marquee declared it "the guitar event of the year," and something that important would certainly merit another live album, wouldn't it? Beacon Theatre: Live from New York is a hefty two-disc set that features plenty of Bonamassa's trademark guitar work, at once precise and bombastic and firmly rooted in the traditions of British blues, and for this show he had Paul Rodgers on hand to lend appropriately swaggering lead vocals to a pair of Free covers, "Fire and Water" and "Walk in My Shadows." Two other guest singers pop up on this set: John Hiatt, whose craggy tone lends a welcome bit of texture to versions of two of his tunes, "Down Around My Place" and "I Know a Place," and Beth Hart, who has collaborated with Bonamassa in the past and lends her voice to spirited versions of "Sinner's Prayer" and "I'll Take Care of You." There's no arguing the technical skill of Bonamassa and his band (Carmine Rojas on bass, Rick Melick on keys, and Tal Bergman on drums), who perform with the accuracy of a Swiss watch, but some might question his taste -- there's nothing the least bit subtle about Bonamassa's big, burly sound, and the emotional shadings of these songs are pretty much trampled into the dirt by the end of disc one, while the presence of the guest stars unfortunately reminds listeners that Bonamassa's vocals are not on a par with his skills on the fretboard. But if you're already a convert, Beacon Theatre: Live from New York finds Bonamassa playing with all his might for a crowd who are clearly digging what he has to offer, and if, like many of his fans, you're convinced he sounds stronger and more powerful on-stage, this album will tide you over nicely until he next rolls into your area. ~ Mark Deming

Guitar Shorty
Watch Your Back
$17.20
Add to Cart

Joe Bonamassa
Live at the Greek Theatre
$23.50
Add to Cart