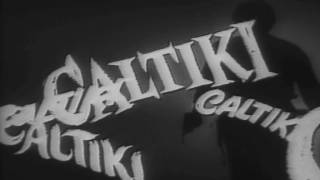 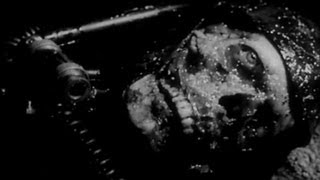 Two members of an expedition into the ruins of the ancient Mayan city of Tikal go into a hidden groto -- only one, Nieto (Arturo Dominici), returns, raving about the ancient Mayan goddess Caltiki. The expedition leader, Dr. John Fielding (John Merivale), follows their trail and finds the missing man's camera in the ruins of an ancient Mayan temple, along with high radiation readings -- the film shows the two men suddenly threatened by something out of the camera shot. A diver (Daniele Vargas) goes into the one unexplored part of the temple, the sacred lake within, and finds its floor littered with human remains and ancient treasure -- on a second dive, he is attacked by something that burns most of the flesh from his body. Suddenly, a huge shapeless, writhing mass rises from the lake, nearly killing Max Gunther (Gerard Herter), whose hand is caught by the creature. Fielding hacks off the fragment holding Max and destroys the main body of the monster by incinerating it. The scientific community is astonished by the fragments of the creature retrieved from Gunther's arm, which is revealed to be a single-celled animal at least 20 million years old; additionally, the fragments, though seemingly inert, are still radioactive and dangerous to the touch, and they react to the presence of atomic radiation by growing at an alarming pace. Gunther gradually loses his sanity as the tissues in his body deteriorate, and he goes on a murderous rampage that takes him to Fielding's home. Meanwhile, the doctor establishes a link between the legends surrounding Caltiki, the Mayans' abandonment of Tikal in the year 607, and a comet that passed the Earth that same year. He learns almost too late that the same comet is making a return visit, putting all of humankind in danger from Caltiki.

16%off
The Monster of Piedras Blancas (Blu-ray)
$25.30 Super Savings
Add to Cart

The Whip and the Body
$17.20 Super Savings
Add to Cart