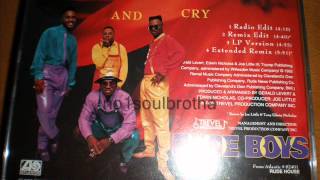 Rude Boys: Edward "Buddy" Banks, Joe Little, III (vocals), Larry "Bingo" Marcus (guitar), Melvin Sephus (background vocals).
Producers: Gerald Levert, Larry Marcus, Edwin Nicholas, Jim Salamone.
Riding on the success of their two laid-back number one singles from their debut release, the Rude Boys come flying back with the uptempo "My Kinda Girl." The New Jack Swing number is energetically complemented by the superb vocals of Joe Little and Buddy Banks, who admirably improvise their way through the vamp. Falling short of the number one ranking, the single peaked at number four after 18 weeks on the Billboard R&B charts. The second, and only other single to be released, "Go Ahead and Cry" peaked at number 43 on the charts. For whatever reasons, this CD did not come close to its potential. This project is loaded with one great song after another, most of them soulful ballads. Alongside Banks and Little, Melvin Sephus emerges as a lead vocalist with his comforting falsetto. From its lyrics, arrangements, productions and vocal delivery, the Cleveland-based quartet imparts a stellar performance, creatively paying tribute to several R&B groups from years gone by. ~ Craig Lytle

The Glory of Christmas: A Treasury of Seasonal Classics
99¢ on Sale
Add to Cart

88%off
A Voyage to Africa; Ambient Music Remixed With Native Sound
99¢ on Sale
Add to Cart